Out of his Shell

The other day we were at a children's museum and Big Kid was in the art studio, where they have bins full of supplies for every project possible and several employees helping the kids with whatever they decide to do. It's pretty cool.

He was creating an artist's trading card when an employee approached.

"What are you drawing?" she asked.

He looked up at her and back down at it. "Yeah..." This frog is Big Kid's life mascot. I really can't even begin to explain the obsession--it is based on a stuffed animal named Zumby he has had since he was 4. It's hard for me to even call Zumby a stuffed animal because he is such a household entity that he feels like a family member. This frog has been drawn thousands of times and I think it looks like a frog.

"You should put a pizza in his hand!"

"Yeah. That would be a good idea, except he's a frog," he said in a friendly voice.

"Are you drawing your turtle on a lily pad?" No she didn't, I thought. (Yes, she really did.)

"Yes. It's a frog on a lily pad." At this point, I wasn't sure if I wanted to crack up laughing or smack her so I did nothing. Big Kid continued drawing.

"Are you going to put a pizza in his hands?"

Big Kid looked exasperated but kept his tone even and light. "No, because I already did the hands and they are down and they aren't ready to hold a pizza and it's hard to erase nicely. And since it's a frog..."

He continued coloring and was soon ready for her to add it to the trading board. She showed it to another employee.

"Look, it looks like a Teenage Mutant Ninja Turtle!"

"Actually, it's a frog. He mentioned that to you." I said sharply, because that seemed easier to get away with than a slap, but it still didn't feel like quite enough.

What the hell, dream killer? I had visions of someone insisting to DaVinci that Mona Lisa looked a lot like Jesus and just running with it. (But maybe it's a little different.)

When we were safely back in the car, I said, "That business in the art studio? How she kept talking about ninja turtles after you already told her it was a frog? That was super weird. You handled it well though, way to go seeming friendly and interested in her ideas even though she was being rather rude about it."

"I'm glad you said that. It was weird. Has she ever even seen a Teenage Mutant Ninja Turtle?" 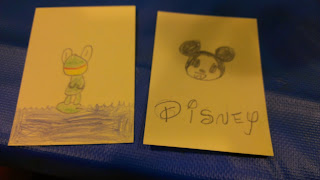 As little kid would write, "Hatters gonna hat." I bet she can't draw a frog or a ninja turtle.
Posted by Unknown

Email ThisBlogThis!Share to TwitterShare to FacebookShare to Pinterest
Labels: now we know who to blame if he doesn't grow up to be a world-renowned artist

That is clearly a frog and not a turtle. Good thing this woman doesn't work at an aquarium!

Thank you, Jackie! I will be sure to tell Big Kid you said so. He will appreciate the additional support!

What did she thing was the shell - I don't get it?

He should have just written "frog" on top - then again she may have said "you spelled turtle wrong."

I must have had some Hatterade this morning because I'm hatting on this chick, lol. oh lk

I don't know what she was thinking! I hat her for it too! I think she's just obsessed with TMNT. I tried to tell Big Kid that maybe she thought the smile was a bandanna but that just made her look even dumber.

I'm catching up on posts tonight.

That's totally a frog. I'm kind of an expert on both. My little sister has always been obsessed with frogs, and for most of my childhood I was planning on marrying Leonardo when I grew up (alas).

The thing is-the kid's drawing is interpreted by the kid. Whatever they say it is, that's what it is (I have a picture of a "bowling alley" drawn by my 4 y/o that attests to the interpretive nature of children's drawings). She clearly wasn't listening to his responses and that's what would have bugged me most.