Yesterday I went to a shelter that keeps all of the cats in rooms without cages (unsupervised!) and lets you wander the hallways and help yourself to the colonies of cats. So I'm pretty sure it was just like heaven.

In the kitten room, once I ascertained no volunteers could see me, I sat on the floor and piled five kittens into my lap and buried my face in them. It felt so good. I kissed every cat in the building and tried to force all of them to hug me (a few were simply not having it, particularly the older cats. Not much they could do about a kiss though.) I was like a wild preschooler, waking sleeping kitties, holding them improperly, dragging them from their food bowls, and maybe squeezing them too hard or petting too enthusiastically. Most of them liked it. I loved it.

I fell in love with half of them. I desperately wanted 6 of them. The front desk guy assured me that they were buy one get one free, so I'd only have to pay for 3 of them. It's a good thing Mr. Ashley was there because I don't think I could turn down free cats.

We went back this morning, kids in tow, and covered ourselves in kittens again.

We decided not to get a rebound cat.

We decided to get two!

This is Calvin Alexander. Sometimes Big Kid "accidentally" calls him Socks. He's tiny and fuzzy and sweet and a total wild maniac who climbs lamps, hangs from the side of my new couch, growls at the dog, gets into drinking glasses, and knocks things from tables: 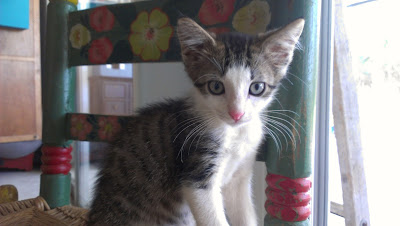 This is Indomitable "Dom" Diamond.  He came with the name Indomitable Dom because he was thrown from or hit by a car and almost died--we added Diamond because why not go full stripper name at that point? Mr. Ashley liked him best and then when we brought the kids, Dom immediately sat on Big Kid's lap when he sat down: 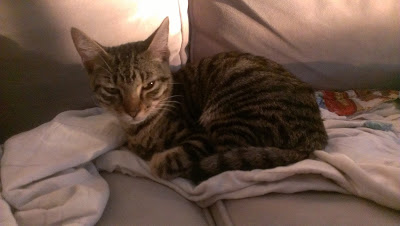 He rode home completely unconcerned (as Calvin stuck both paws out through the slats of the cat carrier and screamed), he has no opinion on the dog (who is really hoping to gain a friend somewhere in all of this), and is currently absolutely euphoric while leaning against Mr. Ashley in bed with the fan blowing in his face. He keeps kneading the memory foam mattress topper with his paws.

But earlier when Calvin stopped wrecking shit and settled down on my chest for a nap, tiny little purring face tilted up at mine, itsy bitsy paws stretched out to rest in my neck, my heart felt pretty justified in signing up for this insanity. 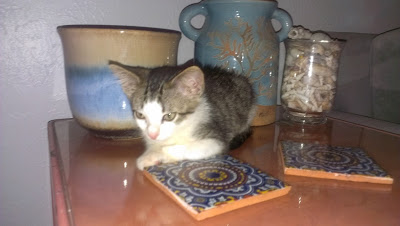 Calvin has tried to knock all of this stuff down. All night long. 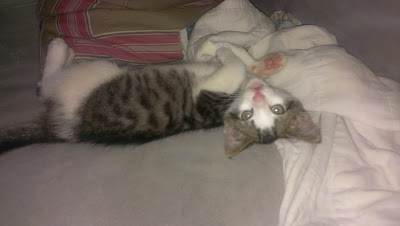 One of Calvin's favorite past times is scratching kids, but who can blame him? 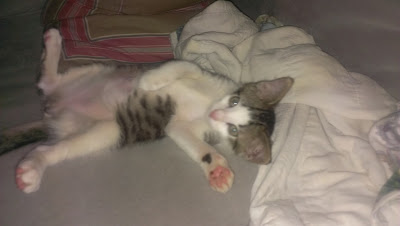 Dom is less photogenic but pretty in person, in a sweet, kind, solid way. 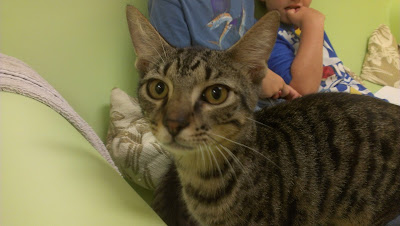 Dom is a very nice cat. Even if he has the name of someone who might dry hump you or break your legs. 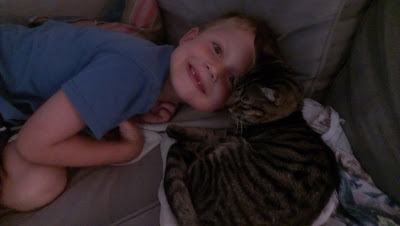 While this is certainly a decision I may regret in the future, it's keeping me happy and busy right now. Calvin is purring loudly on my shoulder as I type and that makes it worth the trouble he will surely be.
Posted by Unknown

Email ThisBlogThis!Share to TwitterShare to FacebookShare to Pinterest
Labels: things i knew i should not do but did anyway and happily

Oh Ashley, I just smiled reading your post and my heart did a squeeze of joy. I am so happy you adopted two sweet kittens. I know they will never fill Pearl's void, but they will give you so much happiness in their own ways. We have Callaway, my daughter's cat, living with us. He was 1.5 pounds when she got him and he's a big 13.5 pounds now. We adore him almost as much as our daughter does, even though he has totally ruined my two leather sofas. My husband hates that part, but is Callaway's biggest fan. I know your boys will lavish so much love on your two babies, and also that they will bring you some joy and peace in your heart. It's good to read a post and know you're doing a little better. I was so sad for you. Take care of yourself. Sending smiles from South Carolina.

OMG i LOVE dom, he seems like an old soul ;) Im glad you guys found so new family members

Awww!!! I'm so glad you found some new kitty friends! My brother had to put down their sweet old lab a couple weeks ago on a Thursday, and by Sunday they had a new puppy, even after swearing it would be a long time if ever. Tori left such a big empty space. It was like a black hole of love and they just had to fill it. And you can even spend alllllll day long bonding now that the boys are back in school!

It must've been hard to pick just two! You did good though....one wild and one mellow. :-)

I support ALL rebound relationships. Yay! Looks like you have two "characters" :)

Congratulations! Calvin and Dom both seem like they will bring love to your family in different ways. Good luck to Murphy finding a friend in those two! :)

YAY! Look forward to many stories of the mayhem to come :)

I LOVE THIS - Congratulations! I am SO HAPPY for you, lovely. xo