Anyone who has followed our story for a while knows that one of my best friends had a baby 6 months after I had Big Kid, primarily so that he would have a built-in friend and we'd have more excuses to hang out together, and all of that has worked out splendidly. 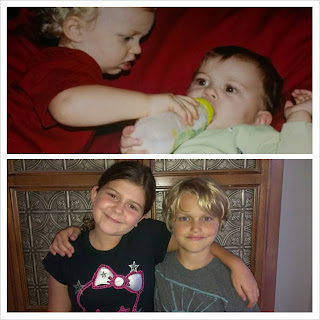 Since she has understood the concept of romantic love, Em has had her sights set on Big Kid. I'm not sure if he has ever outwardly encouraged her in this and I have, in fact, consoled both of them at different times--her because he had the audacity to say they may not get married and him with repeated promises that he can marry who he wants. He loves her with an intensity but probably not the intensity she would prefer. 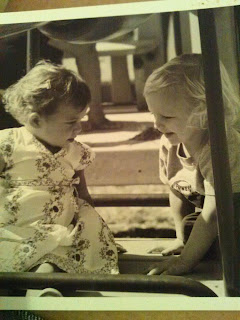 She was over today to celebrate his birthday and this morning I saw the shadows of the neighbor girls (we have tons of them) through the sidelights at the front doors.

"The girls are here, if you guys want to go play." I announced, mostly to little kid.

"Who are the girls?" Em asked, as he opened the door and peered outside.

It was not the girls, it was an envelope containing something that was scribbled out. The boys decided this was the beginning of a prank war and put a vomit-flavored jelly bean

in a paper cup and left it on their door step with a note.

As we left to drop little kid off at a friend's house, I noticed three of the girls in their yard, eyeing our yard and holding a piece of paper. It was the two littlest sisters and the oldest, a combination of two different neighboring houses. The middle one was missing and I wondered where she was. The other three acted like they didn't see us.

Mr. Ashley called soon after and said he came home for lunch and there was a drawing of Big Kid and Stella (the middle, and my favorite) getting married with a heart around them on our door step. I mentioned this to Big Kid and he scoffed.

"That is one of their favorite jokes, they love to act like Stella is in love with me."

"Really?" I asked. I thought Big Kid was enamored with the oldest sister.

"NO! It makes her really mad when they say it."

"She's probably just embarrassed." Right then I glanced in the rear view mirror and saw Em in the back seat, looking slightly ill.

"Who is she?" She asked. "The tall one?" referencing the oldest (stunning) sister.

I suddenly remembered all of the times I sent little kid out to play and Stella would knock again and say, "What about Big Kid?" She is a tiny thing with a tangle of brown curly hair and freckles across her nose and mischievous eyes with dark eyelashes. I then remembered all of the times they had been paired as Cinderella and the prince in the backyard plays the oldest sister produces. I thought Big Kid only went outside if the oldest sister was present but noticed the other day when she was in our house that he would barely bother to look at her and wondered why sometimes he's out there for hours and other times he comes right home and says the wrong people were there. Everything became a lot clearer then.

We arrived home and the offensive item was on the door step.

"Pick it up," I said, waiting to get inside.

Big Kid hesitated as he looked at it. "If you don't want to touch it, I will," Emily stated. "This was probably a prank," she continued. "Don't you think? Are you going to get revenge? You should get revenge!"

Big Kid agreed this was probably a prank. "I'm going to write a note and go back over there," he decided. The note was about the vomit-flavored jelly bean from earlier, which, it turns out, the girls were smart enough to throw into the bushes. (I told the boys that girls would never eat a mystery jelly bean in a cup.) They both went over to deliver it.

When they returned, Big Kid told me that he had explained the note he found to Stella (Can you imagine?) and she said her sisters did it to get revenge on her. He thought that terrible of them. He said Stella was upset.

"We should fill up water guns and wait in case they come back," Em declared.

I decided it was time for lunch.

After lunch it was rather quiet, with Big Kid flipping through a new book he got and Em glancing nervously out the windows. She seemed sad.

I pulled Big Kid aside. "Look, you're not in trouble or anything but I just want to let you know that I think Stella does like you and--"

"Okay. I'm just saying. I've been a girl for 34 years and have chased boys for many of them and I know what I'm seeing here. I think Stella likes you and she's probably a little freaked out. I think Emily sometimes has those same feelings for you and is feeling threatened and a bit hurt. Do what you want but if I were you I would majorly try to distract Em with something fun and completely ignore the neighbor situation for now. Then when she goes home, figure out what to do about that."

He nodded. "Okay. That's what I'm going to do." He walked back inside and asked what she wanted to play. They ended up playing tag inside the house which was annoying, but whatever. Several minutes later she said, "What do you think little kid will think?"

"About you and Stella?"

"He won't think anything. There is no me AND Stella. Let's keep playing."

They played rambunctiously and seemed carefree for hours more and then it was time to drive Emily home. It was quiet in the car and out of nowhere she said, "I can't believe she wrote you a love note." She looked wounded. It hurt my heart.

They are 9 and 10. I thought I'd have at least 4 or 5 more years before I overheard conversations like these.

She changed the subject and seemed happy the rest of the way home. When she got out of the car, I asked, "So what are you going to do about Stella?"

"Probably throw myself into a bonfire," he said with a sigh.

"Big Kid! That's a little dramatic. Stella is a cool girl, you have to be nice to her. Do you like Stella?"

He sighed, exasperated. "I'm too young for this! You know how people always say, 'I'm too old for this!'? That's what I'm saying, but the opposite!"

I laughed and agreed. He is too young for this. And I am too young to witness this.

"I think I will shave my head, get a scar on my face and move to Alaska," he said.

"Good luck with that. I'm not moving to Alaska."
Posted by Unknown

Email ThisBlogThis!Share to TwitterShare to FacebookShare to Pinterest
Labels: these poor girls

Best story ever. You will read this at their wedding someday....