This is Nora Noodle. 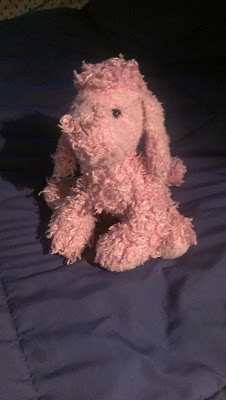 Long ago, when her hair was not matted, her pink was much brighter, and she still had a nose, her name was Poodle Noodle.

When Big Kid was 4 he had a little bit of money to spend and I took him to the toy store to pick out a Webkinz. He asked the sales girl for this one.

I looked at him, a little skeptical myself. He nodded.

"That's the one he wants," I stated, losing all of my own indecisiveness and feeling annoyed, silently challenging anyone to give my son's pink poodle the side eye from that moment forth.

At the ripe old age of 10, she is still the one he wants. This pink poodle and his frog, Zumby, are in his bed every night and discretely tucked away into a nightstand drawer when friends come around. A year or two ago, Big Kid began looking at her more critically and decided Poodle Noodle was a ridiculous name. He was considering letting her retire to the (gigantic) bag of beloved stuffed animals that take up too much room and must never, ever be parted with but sensing his reluctance, I suggested a name change. He came up with Nora, which I love, and I begged him to keep Noodle as her last name to pay homage to her past. I believe he secretly likes it when I call her Poodle Nora Noodle but he doesn't call her that himself.

Every time I see that scruffy, faded, nose-less pink poodle, I remember his joy over her when she was still brand new and it brings me back to his little self. She's a million times more special because she's pink and I'm so glad no one talked him out of it.

And whether it's ridiculous or not, in my heart she will always be Poodle Noodle.

(I found the post where he originally got her, although she is not the focus.)
Posted by Unknown

haha - your writing voice has changed so much in the past five years. If I'd read that not knowing who wrote it I never would have guessed you :)

I swear when I found you I went back to the very beginning but I don't remember that one.

Jamie, it's funny for me to see too. I don't know if it makes me want to read all the way back to the beginning or makes me think I'd better not in case I start editing the past (lol).