Not long ago, I received a Nickelodeon party pack consisting of Spongebob and Dora party plates, cups and napkins to review. Although we're huge Spongebob and Dora fans around here, I was skeptical in my ability to generate any excitement over paper products. What would I even say? "The food sat on the plate very nicely and the cups did a wonderful job containing liquid!" 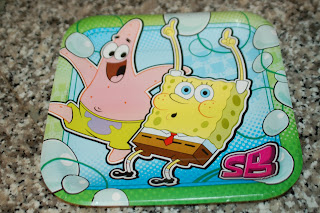 But that's because I was looking at the plates, cups and napkins with grown up eyes. I pulled out the party pack last time Em spent the night and the kids were overjoyed--to 5-year-olds, dining on colorful plates adorned with your favorite characters means you are partying big time. They couldn't believe we were having an actual party (because I guess it's not a real party until Spongebob or Dora show up).

There was much discussion over who would get which character and Em literally squealed with happiness when she realized the Dora napkin's pattern continued onto the back of the napkin. I will say that the colors were bright and the materials were sturdy and it was all indeed very festive. 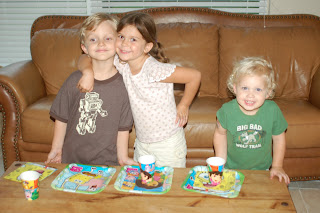 I asked the kids to film a commercial about the Nick party products and they did:

(Please disregard their $1 offer at the end, they got a little carried away with the excitement of selling--and this was the 97th take so I decided to just go with it.)

All in all, Nickelodeon party ware gets the Ashley household seal of approval and I highly recommend keeping some around for impromptu parties as well as birthday celebrations.

Here's a link with Spongebob and Dora party recipes and games if you want to really go all out.

Email ThisBlogThis!Share to TwitterShare to FacebookShare to Pinterest
Labels: who knew paper plates could be so exciting

I have to say that Big Kid's voice is the most adorable voice ever.