Camping with the Ashleys

Once we gathered everything necessary to take 2 kids and 2 dogs camping out on a sand bar for one night, I looked at that gigantic heap of crap and the riled up children and the already whining dogs and thought, "What the hell are we doing? Why don't we just go to the pool and stay up watching movies or something?" but it was too late to back out then.

But everything went better than expected! No one was bored, no one misbehaved, the whining was at a minimum and we spent a ton of quality time together. It was fun! I think my kids are getting to an age where we can actually go do stuff! And my dogs aren't quite as dumb as I thought! 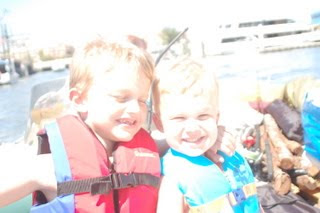 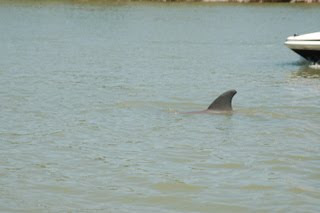 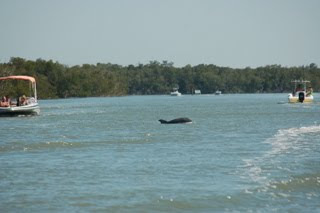 Nope, not Jaws; just a dolphin. One of many. 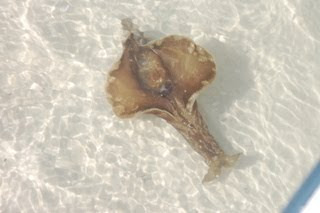 This thing was very weird. I've never seen one before and when I poked at it, it squirted red inky stuff out. (It wasn't blood.) 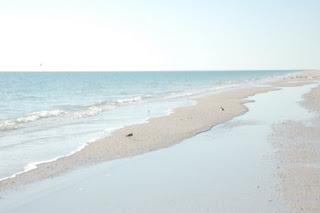 The island where we camped 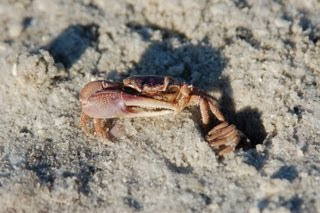 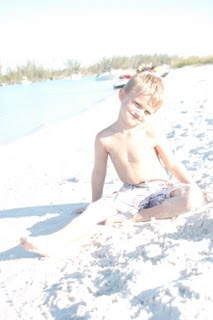 Big Kid playing in the sand 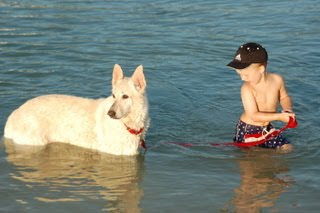 little kid the Dog Whisperer.
Here he is "playing" with Lily. He "taught" Murphy to swim by dragging him around in the water until I witnessed this and rescued poor Murph who was struggling to keep his head above water. (Murphy can swim just fine when he's not being pulled on a rope.) 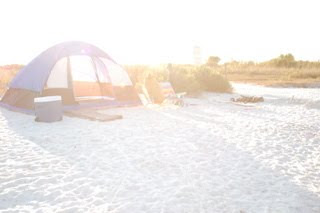 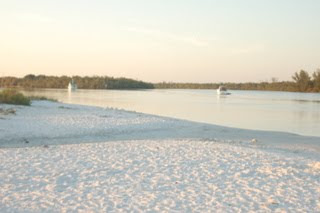 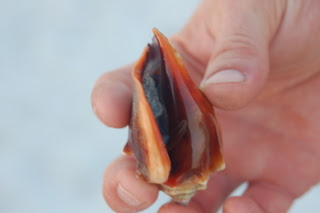 This is Conchy. He was unfortunate enough to be found by little kid and was adopted as our camp pet. He lived in a plastic Solo cup. Both children insisted that we were keeping him forever but I liberated him in the morning behind their backs, mostly because I don't want a pet Conch. 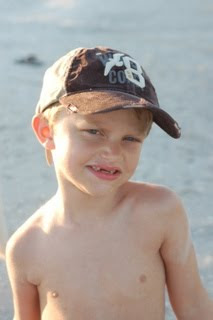 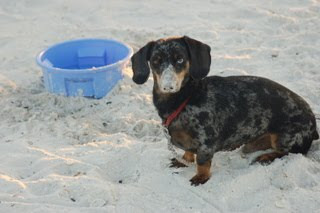 Murphy had NOT been digging around in the sand for the remnants of a sandwich he thought he found earlier and he doesn't know why people kept accusing him of it. 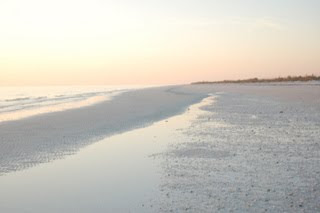 I took about 9 trillion sunset pictures. 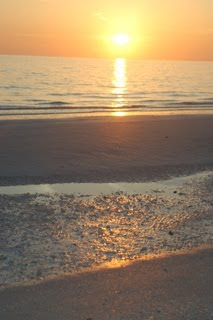 But I'm only sharing two. 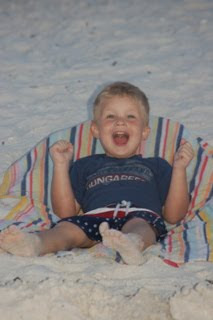 little kid in his "beach" chair. 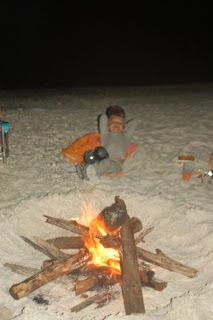 Big Kid relaxing by the fire. He put on an impressive glow stick show for us just after this. 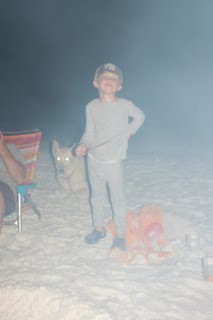 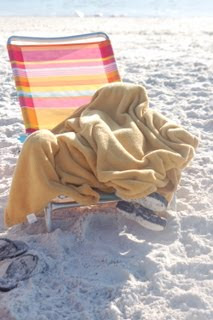 Too bright too early for Big Kid.

While we were sitting around the camp fire after a long day of playing, little kid walked over to me and gently put his sticky, sandy hands on either side of my head. "Mumum, I don't want you to worry 'bout no bad guys tonight. If bad guys come, I'm gonna stab 'em wif my weapon," and then he reached for his marshmallow roasting fork to show me how he would do it.

"Okay, I don't want to hear about stuff like that. How about you just defeat the bad guys and then hold them until the police come to take them to jail? Like a Super Hero?"

Changing the subject was futile after that--everything related to his weapon and the bad guys. I was starting to tune him out when I heard him say, "I'm gonna beat their brass off wif my weapon!"

"You said 'brass' again. Please don't use language like that any more."

"But I can beat their arms off? How 'bout their heads?"

He was beyond exhausted by bed time, but still concerned about letting his guard down around his enemies.

"How will I know if bad guys come if I'm sleepin'?" he protested.

"The dogs will bark."

"Well, I'mma need my weapon in bed then."

So, I let him sleep with a marshmallow roasting fork.

And the very first thing he said the next morning when he opened his eyes was, "Where's my weapon at?"

He's pretty sure that the bad guys knew he was in the tent with his weapon and that's why they didn't mess with us. Which worked out well because bad guys would have been a major buzz kill.

So I survived camping. I would even do it again!

Email ThisBlogThis!Share to TwitterShare to FacebookShare to Pinterest
Labels: One Day

woohoo glad you lived to tell about it:)

OMG, You are raising a Republican.

Sorry. You are one brave woman. Two kids, two dogs and one parent. I can't even imagine.

I DO think I'm raising a Republican. I can totally see him becoming the "They's tryin' to get mah guns!!1!" guy. Dammit!

And I DID bring Mr. Ashley, so there were 2 parents. I'm not THAT crazy.

I don't know where you live, but you sure are making Kansas City look pretty lame with this beach camping post. ;)

Ah-mazing pics! where was this at? CA?

Camping is not my gig but camping on a sandbar might work for me.

That sounds like so much fun! I wish we lived remotely close to something other than a lake. I can't believe how big the boys are getting, and Murphy is just too cute for words.

Ummm. I have to ask. Where is Reggie? Did I miss something?

Reggie is alive and well and wonderful! He's just not any trouble so he doesn't get much coverage. I'll have to share pics of him soon and I actually did take steps (one baby step) towards getting a Reggie cam set up.

Looks like you guys had a great time!! I would much rather that camping trip than the one I had to take my son on for cubscouts.. in 30 degree weather and mud up to my knees!!

That looks like fun. Wish we could camp on a beach but we'd have to drive several hours just to do that and that is definitely not in my plans.

Toddlers are SO obsessive! With mine, it's farms (COW farms only) and construction equipment. We spend a good portion of the day talking about "scoopin" various objects, or talking about what cows eat (milk).

Maybe your raising Dexter! hahaha, just kidding. What island is this that you can unleash the dogs and camp? We have been looking for a place to take Lulu in CFL.