Not much exciting going on in my life, so let's talk about Theodore Roosevelt.

Yep. Bet you didn't know that he was a total bad ass, did you?

He was the 26th president of the United States. He was Republican. He said, "Speak softly and carry a big stick; you will go far." You probably knew all of that or can vaguely recollect most of it.

He had a photographic memory and a love of reading. He was a brilliant conversationalist and an avid learner. He wrote 18 books over the course of his life time. He enjoyed boxing until one of his retinas detached and he went blind in that eye. He was a 3rd degree brown belt in Judo. He frequently skinny dipped in the icy waters of the Potomac in the winter. He became president after McKinley was assassinated and at 42 years old, he was the youngest president to ever take office. He was the first American to win the Nobel Peace Prize for negotiating the end of the Russo-Japanese War.

He decided not to run for re-election and went on a year long African safari instead. Dude was shot in 1912 while campaigning to be president again. The bullet passed through his steel eyeglass case and his 50 page thick speech and got lodged in his chest. He refused immediate treatment and insisted on making his speech. He spoke for ninety minutes and apologized for cutting it short.

"Ladies and gentlemen, I don't know whether you fully understand that I have just been shot; but it takes more than that to kill a Bull Moose." Taft beat him in that election.

The teddy bear was invented after he issued the mercy killing of a wounded bear in 1902 (*Not true, read edit.) A toy company got permission to sell a toy bear named after him."Teddy" was his first wife's nickname for him and he hated being called that after her unexpected death in 1884.

His wife and mother died on the same day, in the same house, of unrelated illnesses two days after the birth of his first child. Here is his journal entry from that day: He later wrote this about his wife Alice:

She was beautiful in face and form, and lovelier still in spirit; As a flower she grew, and as a fair young flower she died. Her life had been always in the sunshine; there had never come to her a single sorrow; and none ever knew her who did not love and revere her for the bright, sunny temper and her saintly unselfishness. Fair, pure, and joyous as a maiden; loving , tender, and happy. As a young wife; when she had just become a mother, when her life seemed to be just begun, and when the years seemed so bright before her—then, by a strange and terrible fate, death came to her. And when my heart’s dearest died, the light went from my life forever.

And then in an attempt to dispel his heartache, he never wrote or spoke of their union again.

Somehow I came across his journal online and ended up reading some of it which is what sparked my curiosity. I brilliantly filed the link to his journal in one of my bookmark folders to share with you all...and now I can't find it. So instead, HERE is his Wikipedia page and HERE is another page I found that has some of his journal entries.

And here he is, riding a moose: 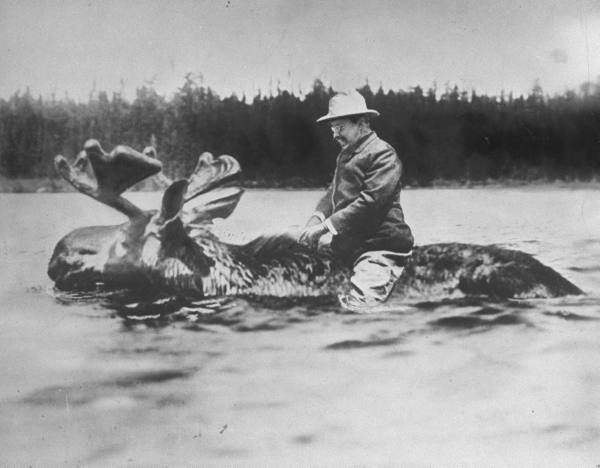 I told you he was cool!

*Edited to add: little kid spotted T.R.'s post on my computer screen and immediately recognized his total badassery. He demanded more photos and that led me to this Mental Floss link
about Theodore Roosevelt. I think Wikipedia was wrong about the teddy bear thing, it looks more like T.R. refused to shoot a bear that was tied up. I think Mental Floss got it right because Wikipedia refers to a political cartoon that inspired the creation of the teddy bear and Mental Floss includes the cartoon, which supports their version of the events. Anyway, if I haven't already bored you to death with this post, you may enjoy the Mental Floss post too!
Posted by Unknown

Email ThisBlogThis!Share to TwitterShare to FacebookShare to Pinterest
Labels: "I am a part of everything that I have read"--Theodore Roosevelt

He's better than cool...this dude was awesome! Thanks for the mini history lesson :)

Awesome! One of my favorite things about your blog - I never know what you are going to talk about!

And this is how we will teach our children history in the future.

Cool! He has been my favorite president for a long time, for all the bad ass reasons you mention.

I had never heard the mercy killing story--the one I have always heard was the 'stay of execution' story.

Thanks, I have PMS and am now crying at my desk, thinking about his Mom and wife... way to go ash..

Read Imperial Cruise for a look at his foreign policy (http://www.amazon.com/Imperial-Cruise-Secret-History-Empire/dp/0316008958/ref=sr_1_1?ie=UTF8&s=books&qid=1272398377&sr=1-1). His domestic policy was great...he was the first president to promote conservation of the wilderness and created the first National Parks. But, in his foreign policy dealings, he did a lot of backroom finagling that caused us to get involved in WWII. I like him still but not as much.

Total BADASS! I liked FDR too.

I agree with Mental Floss. Last year my oldest son had to do a research project on any person and he chose Teddy Roosevelt. :) It was a lot of fun reading about him together. The teddy bear hunting incident was my son's "fun fact" on the sidebar of his report poster. :P

This is amazing! I now want to go out is find is biography.