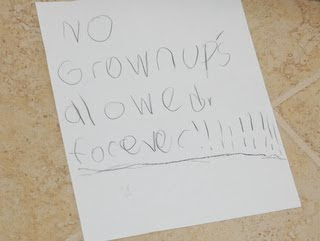 Big Kid sure got me good yesterday. Here I thought I'd never be allowed in their room again. Who will tuck you in each night? Who will change the sheets? What if Murphy poops in there, who will pick it up? I asked. 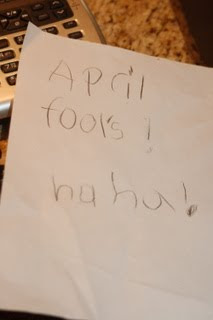 But lo and behold, it was all an April Fool's joke! I can still go into their bedroom and will be tucking them in, changing the pain-in-the-ass bunk bed sheets and cleaning up dog crap as necessary.

My prank wasn't as clever. I made meatloaf cupcakes with colorful mashed potato frosting for dinner. Big Kid caught me frosting them and said, "Um...why're you puttin' mashed 'tatoes on cupcakes?"

"It's our April Fool's dinner!" I proudly announced.

"The cupcakes are made out of meat! Don't tell little kid, I'm going to surprise him!"

"So...you made cups of meat and put mashed 'tatoes on them and that's dinner?"

He looked doubtful. As I put his plate in front of him, he went pale and his eyes started watering.

"Want my leftover sandwich from Jason's Deli?" I offered.

little kid didn't really care. He was momentarily confused that it wasn't a real cupcake and then shrugged it off and asked me to cut it into pieces and smother it in ketchup.

I'm taking those boring brats boating and camping tonight. This seemed like a much better idea yesterday before I remembered that I don't really like camping unless an RV or cabin is involved. I can also do a KOA (briefly) but I've never camped on a sand bar before. Let's hope no one has to poop out there.

If I'm not back by tomorrow, call the coast guard and tell them I'm out in the Gulf somewhere!
Posted by Unknown

Email ThisBlogThis!Share to TwitterShare to FacebookShare to Pinterest
Labels: Rescue me

I love the cupcake idea. I might have to try that for something.

HAHA! I love that idea. I wonder if there's a vegetarian version of meatloaf cupcakes. Hmmm.

Um, should we call the coast guard? I'm a bit worried!

I think that's a great idea! Why can't I come up with this fun stuff? I guess I just need to check here for all the major and minor holidays. I totally got my kids with the green milk on St. Patricks day - all thanks to you!