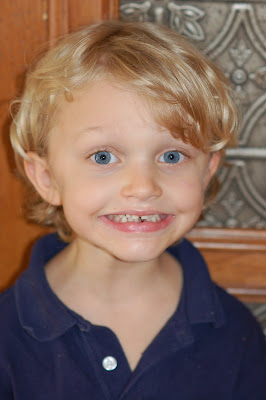 I just did my first stealth Tooth Fairy mission.

He was originally cool about the missing tooth but about an hour later he was a little teary eyed and I could tell he was stressing about it.

Our county's health department has a real life tooth fairy that's at all the health and safety fairs. I met her not long ago and got her card and she mentioned that kids can call her and ask their questions or share their announcements, so I gave him her number and he left a message on her voice mail letting her know that he lost his tooth but he's not sure where it went and he hopes she can still come anyway.

We followed up with a note under the pillow--he didn't want to mention that he may have swallowed it, for fear she'd be pissed, so we just said we couldn't find it.

She wrote him back and said that she already took it because she was so excited to get such a nice tooth, then she sprayed her note with Chanel No 5, glued a purple rhinestone on it and slipped it back under his pillow with $5.

I happen to know that we'll be seeing the real life Tooth Fairy on Saturday at an event I'm working, so I'm going to drop her an email letting her know that he left the message and debriefing her for their encounter on Saturday. I actually ran into her at a pizza place the other day and didn't introduce her to the family because I couldn't remember her real name and wasn't sure how to handle the Tooth Fairy drinking wine and wearing capris vs. her sparkly dress, wings, and diamond toothbrush wand.

The whole real life Tooth Fairy really kind of complicates things if you think about it, but it all worked out this time. 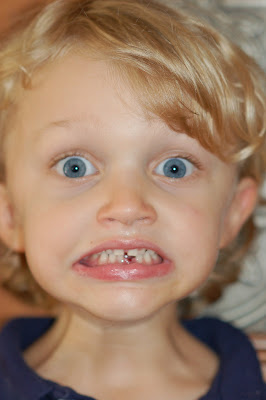 That's great! I'm sure BK will love getting his note and cash from the tooth fairy!

That real life tooth fairy thing can get complicated if the kids recognize her "off duty." She probably should get a better disguise. A wig or some cool glasses or something.

Oh, you added photos! SO CUTE! Love that second one with the strained neck!

LOL, he's going to be so pissed if he sees I shared the second one. He tried to make me delete it from my camera.

Thanks great about the real tooth fairy, especially that kids can contact her with questions.

Awww, he's totally growing up!!! I suppose it's a good thing you didn't have to pull it but... um.... yuck? I lost a tooth once in my sleep..... Can I just say that he has the best tooth fairy ever?? He gets to call her on the phone and gets notes sprayed with Chanel? Where was this tooth fairy when I was a kid? LOL (That is interesting, btw, a real life tooth fairy)

he's just the cutest thing ever!

LOL I love the second pic. Looks like he should be saying "Eeeeek, I can't find the tooth!"

Too CUTE! I love that you have a real, live Tooth Fairy.

In our town we have a super-ornate Victorian house that sits alone on a little rise. Local kid rumor is that's where the Tooth Fairy lives.

He looks so adorable with that missing tooth!

because I said so said...

That is TOO cute....he is such a cutie pie. I only have girls so I eat up the cute little boys!! Wow, the tooth fairy was generous....

wow .. what a gorgeous gorgeous child .. missing tooth and all .. my big kid keeps announcing that her teef are loose ..and when i tell her they are not, she says, well they will be soon!

BK is quite the looker:-)

crap.....5 bucks!!!! The Boy is getting ready to loose his first one. The tooth fairy better keep a 5 spot in her purse or it might be a few quarters. I think I'll give 5 for the first one then less for the others.

He has the bluest eyes ever.

Ashley, that BK is just precious. I love it!

The tooth fairy fell down on the job at my house this week. I penned an open letter to her to let her know she needs to straighten up her act. Http://nativemom.blogspot.com.

HOLY SHIT! The F'ing Tooth Fairy has been to our house 4 times in the last few weeks...and dropped 20 bucks total! I will be so glad when this is over. Don't get me wrong, it was fun in the beginning, but now it's just annoying and expensive! Oh wait...I forgot that now I have to fork out over $5K on braces! Who thought up this crap anyway?????

That is the cutest story ever! My dad once forgot to leave tooth fairy $. Try explaining that one...it got complicated...but I think I got more $ in the end. Ah, my earliest lessons in the power of guilt and laying it on thick!

This has got to be the cutest picture ever--I love the face B.K. is making.
BTW, how is L.K. doing in daycare?
Did the Ashleys participate in Talk Like a Pirate Day yesterday?

Oh look at him all gap toothed, he is so cute.