I'd also like it if we could bring back the "big hips" look from old movies. Grace, Warbucks' secretary, is 300x sexier than the rails we worship nowadays, and those skirts that showed off the hips and were all twirly at the bottom were awesome. 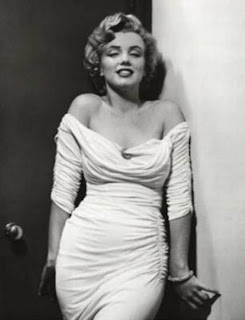 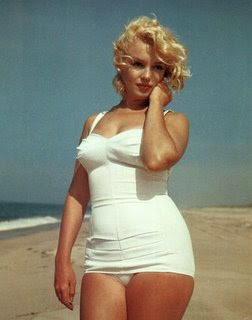 A lot more of us would look pretty damn good if we could bring this look back. It would be easier than starving ourselves. I look as good as Marilyn in that second picture (if you cover up her head. My ass is even a little smaller...)

Also, let's stop with the fake boobs. I'm tired of feeling like a sack of flab because my breasts don't stick to the front of my chest like two halves of a grapefruit, never moving. I hate that "surgically enhanced" is becoming the new norm. Let's quit that.

I've got tons of work to do because I demanded a whole family vacation before my dad starts chemo, and everyone else agreed (after some insisting from me), so I'm out of here on Sunday for 5 days of innertubing.

It would be extra awesome if we could have the big hips and saggy boobs movement in place by then, so you all get working on that.
Posted by Unknown

Email ThisBlogThis!Share to TwitterShare to FacebookShare to Pinterest
Labels: big hips are hot

Where do I sign up for that campaign? That's a platform I can get 'behind'.

Totally am with you on the saggy boobs thing. Mine aren't quite saggy yet (give em 10 years though), but they are big, and DO NOT protrude from my chest like two sex torpedos. They DO look fantastic in a bra and fall quite a bit when not in a bra. I will NOT get a breast lift to fix this.

I will eat red velvet cake a la Megan Fox (bitch) to gain weight in my hips though. I will try my best to do this before you return :)

I agree with you 100%. I really don't understand the whole I'm so skinny I look sick look.

Hell yeah! I so agree with you! I can't understand why these people continuously wanna throw these bony-ass women (and men) in our faces like they do.

It isn't sexy. I don't care what they say. It's sick and it's wrong to make women (and men) feel like they have to starve themselves to be considered "pretty/beautiful/sexy".

My boyfriend would have a fit if I even suggested I wanted to get skinny to look like those girls on tv or in the magazines!

Amen to curves! If you ever decided to start the movement, I'll be there!

Absolutely! Someone needs to start a facebook group to get designers to start catering to this image (as that seems to be the best way to get any attention these days).

I agree with you 100%-let's face it. Most women that have children also have wide hips!

Note to self: Pay more attention to saggy boobs and rounded hips. Like Marylin's.

I've definitely got the big hips thing going on, but since my boobs are so small, they're just not all that saggy.

She glowed didn't she? Maybe you glow when you eat more than a crouton a day.