The other day I was taking my sweet ass time in the bathroom because I knew that little kid was safely contained in time out, when this peered at me from around the door way: 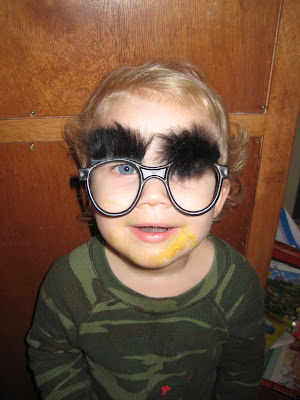 The yellow stuff is paint. He apparently broke into a paint-by-number set and drank the yellow on his way across the house to find me.

It's incredibly hard to punish someone who is wearing furry eyebrow glasses.

The last two nights, I've woken up to this (minus the yellow paint): 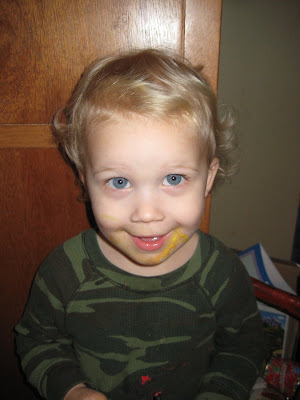 in my bed in the middle of the night. The night before last I woke up around 3am and there he was, sitting on my bed watching some comic on Comedy Central who was saying "Mother Fucker" a lot, grinning ear to ear.

Last night Mr. Ashley woke up to find little kid hovering over him with a glow in the dark eye ball.

So...the crib isn't working anymore as a guaranteed method of confinement. We're trying bribery now, but he's proven hard to bribe in the past. I do NOT, repeat, do NOT want his cold baby toes on my back every night and him heavy breathing in my ear and staring at me while I sleep, so let's hope it works this time.
Posted by Unknown

Email ThisBlogThis!Share to TwitterShare to FacebookShare to Pinterest
Labels: He's cute but not that cute

Gate. Two of them. Stacked. It is like a baby prison. Just give him a sippy cup to clang on the bars.

Funny in My Mind said...

Wow, he's cute. When mine was that age he would go outside and ring the doorbell at 4 in the morning. In winter. In bare feet. Good times.

Sounds like he needs some shackles! You cant do that though can you?

#1: I think one of my ovaries just burst due to LK's cuteness. I mean, man alive, that kid is CUTE!

#2: With the glass (minus the eyebrows), LK kinda looks like Ralphie from A Christmas Story.

Cold toes in the back suck but look at that face? How can you say no?

OMG, He is so stinkin' cah-yute!

He's sure can rock the Marx Bros. glasses!

Oh my goodness! I haven't laughed that hard in a LONG time!

He's precious!! Just precious! Love the glasses and the eyebrows! Too cute! Lucky you! Lisa

Oh, yes he is that cute!! Especially in those two pics.. better luck than me on the bed thing btw..

I was watching that Comedy Central show the other night. He did say mother-fucker a lot. LK is totally That Guy, but he's so stinkin cute you gotta love him anyways. Did you cut his curls?

Oh man, how can you resist? But you know it's a slippery slope letting them sleep in the bed with you "every now and then". Don't do it! He is so precious.

Haha-he does resemble Ralphie. Now to find him pink bunny jammies for his Halloween get-up. Maybe the pics will be payback for the sleepless nights?

There is a reason God makes 'em that cute. So we don't kill 'em.

at least he crawls in bed with you and doesn't go outside!

what is it that makes them just come and stare at you in the middle of the night? i was joined by mine this am not so much fun being wedged between her and hubs!

Damn if he's not the cutest little devil.

Crib Tent - Toys r Us. Tried that yet? For some bizarre reason, my Bear (24 months) hasn't figured out how to get out.

lk is a genius and may escape, but it could be worth a try.

Seriously...how can you not smile when you see the cuteness of that face? And the glasses...OMG! Paint shmaint.

Damn woman, watch your kid! He's going to eat a bottle of pills or something if you don't keep an eye on him.

LOL! That was great! He is beyond precious!