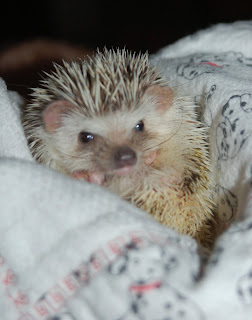 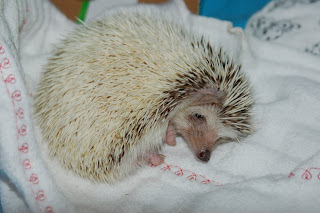 She said she saved the cutest one for me because she could tell Mr. Ashley was nice (so it's a good thing he called and I didn't) and as you can see, Reggie Stuart might be the cutest hedgehog on the entire planet. 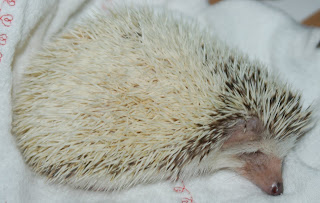 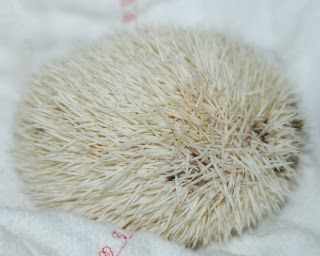 Here he is doing his sea urchin impression. Isn't that clever?

Here is Pearl meeting Reggie. Pearl is my truest love ever. She loves me consistently, persistently, unflinchingly--demanding only a warm lap to sit on and barely anything else ever. Every night once the kids have gone to bed, she likes to sit in my lap. If I wave her away, she'll make a bitchy noise and just find a way to make room for herself on or around me. She won't take no for an answer. She purrs whenever she is near me. She likes to sleep on my chest at night and if I rebel and sleep on my side, she'll perch awkwardly on my hip. I fantasize about a deserted island with internet access, a library and Pearl and I. Unfortunately, her little kitty nose is all out of joint about Reggie. She was fine when he was in the box, but once she went to get in my lap and encountered him there, she sniffed him cautiously, recoiled in horror and looked at me like, "WTF?" before stalking off to another room.

She'll have to get over it though because I love him. Big time. Mr. Ashley does too and he was all anti-hedgehog up until yesterday. He made him a man cave out of a Heineken box and has held him a lot. I really do think he may be one of the cutest, funniest animals ever.

P.S. Reggie smells like a goat because he spent the day riding around Florida in an SUV full of hamsters, other hedgehogs, and 2 dogs, with a goat in the back. Goat smell permeates in an enclosed space, I guess. So, I'll be attempting a hedgehog bath tomorrow.
Posted by Unknown

What do they feel like? Are they prickly? I've never seen one "live", haha.

Are they prickly? or is it soft?

maybe I need to wikipedia!

The quills feel like really thick hair. He has soft hair on his tummy and sides that he lets me pet. His feet are thicker and less creepy than mouse feet.

One quill fell out and it looks and feels like a long, skinny piece of rice. When he is puffed up, it feels probably just like a sea urchin would, spiky and spiny. He gets huffy before puffing up, so you know to give him some space, but he's been doing that less now that I'm not as scared of him.

So far he is sweet, mostly happy, funny and sleeps a lot. He seems to like us, although we do piss him off occasionally. He's fascinating, his little body is so funny and his tiny nose feels like leather and he arches it up to press it onto my finger--seriously, he's darling.

Aw - I totally want one too. Reggie the Hedgie - the name cracked my husband up! Good luck with your new addition. The pics are the cutest!

That's the cutest thing I've seen all week. You should make little mini-posts starring Reggie and his pals!

Uh-oh. Baby Girl saw the picture and now she wants one too.

Aw- he's adorable! Please take pics of his bath as I can't even imagine what that must look like.

Funny in My Mind said...

He is so cute! I am glad Mr. Likes him too! The cat will learn to like him. What do the boys think?

Oh, I wish i could be there to see the bath take place. Or not.

He is too stinkin' cute!

OMG. Can't wait for the adventures of Reggie and Pearl. It will be like little kid and big kid.