Reggie the Hedgie never got a bath yesterday because he's pretty much the boss of the whole house and he didn't seem like he was in the mood for it. He likes to squeeze himself between my body and the couch and lay there, or sprawl out on my lap with his legs splayed in all directions so I can pet his tummy and feet. He's quite the snuggler. That's all he was really in the mood for yesterday and it went on all day.

I still freak out a little when he gets pissy and huffs and puffs up and he uses that fear of mine to control us all. I've been trying to ignore him when he does it and do whatever I want so he knows who is boss, but like everything else in this house, he's resistant to the idea of me being in charge. So, he still smells kind of like a goat. I wonder if I could pass a baby wipe over him while he rests? That's going to be plan B.

We believe our Reggie is handicapable. He's got one foot and leg that are a little weird, I can't tell if it is deformed or broke and didn't heal, but he sometimes walks on the top of his foot or drags it. Doesn't seem to bother anyone but Mr. Ashley, who is also so in love with him that he'd never give him back anyway. I think he's perfect (other than the goat scent), even if he is differently-abled.

Pearl still hates him and I'm afraid she hates me too. She didn't sleep with me last night and when she went to jump in my lap and found him there again, she tensed up and walked away all pissed off. I try to make sure to give her plenty of attention and have tried to have them share the area, but she's not down with that. Even when I pet her when he's not around, she just sits there rigidly. I'll have to find a way to win her back somehow.

edited to add a picture of Reggie and his weird foot. He'll stand on it if I set it up the right way and sometimes he walks on it correctly, but there's clearly something wrong there. 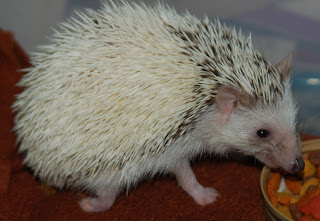 Email ThisBlogThis!Share to TwitterShare to FacebookShare to Pinterest
Labels: she thinks he's a prick

Would it be rude of me to request that you only talk about Reggie if you can provide a picture each time?? I've never heard of a hedgehog as a pet so I'm pretty excited.

Awww poor Reggie and his little deformed foot. I wonder if the vet will know? I wouldn't imagine they get a lot of hedgehogs in there, but then again, what do I know? He's very cute, deformed foot or no.

Ditto never hearing about a hedgehog as a pet, but that is pretty freaking cute!

They look too much like a porcupine, to me.

Could you post a picture of Reggie by an everyday object so we can tell how big he is?

He is a cutie!

Checked with a friend of mine - apparently, hedgies will sometimes subluxate and/or dislocate. Foot may need a splint.

I will get more pics of him tonight once the kids are in bed. He's a little more social then.

I was wondering about a splint, since he will put weight on it and it doesn't seem to hurt him if I stand it upright. I will look into that more, thanks!

It shouldn't be too hard to find a vet if you need one. I didn't have much trouble finding one for my rat, and I imagine any vet that treats small animals would be fine.

I think as long as it doesn't seem to hurt him, he should be okay, but a splint would be good. He's super adorable!

Could he be any cuter? Seriously! I agree with JET, let's see him next to something so we know how big he is! I think I'm in love...

Maybe he needs a tiny cast and mini crutches!

So, what is the long-term plan when owning a hedgehog? When he grows up will he live outside? Inside? Will he be about the size of a cat when grown? This is all new to me and you crack me up - never knew anyone with a hedgehog, and now I'm curious.

oh my goodness i love reggie's little leg. that's the sweetest part about him!

I hear you on the pissy cat! When I got our second dog she didn't come downstairs for about two months. I felt AWFUL! We put her food and potty box up there so she could stay up there if she wanted. She was so stressed that her hair was falling out and she lost weight. I seriously thought about getting rid of the dog because I'd had the cat for about 8 years already. Eventually she came around and asserted herself as the Queen of the House and all is right in the world now :P If she wants something and the dog is in the way she swipes at the dog. She got ATTITUDE and I wouldn't have it any other way. Give Mis Pearl some time and she'll come around and love you again.

He is so cute! Is he soft? He looks prickly but soft at the same time, if that is even possible. What does he eat? And, does he just run around the house or does he go in a cage? Can you tell I want one...

I had to come over here and give you this link! I know you don't fancy yourself a sewer, HOWEVER, this was SOO cute and right up your little hedgehog alley that I had to share it with you!! Seriously, you could do this one...
http://www.schlosserdesigns.com/blog/2009/09/stitched-hedgehog-pattern/

sorry, wasn't sure if I left the correct link! in case I didn't...http://www.schlosserdesigns.com/blog/2009/09/stitched-hedgehog-pattern/

I need to borrow Reggie. Just for a bit. To convince Mr. Sasha that we need one too....

Monogram Momma!! So good to see you. That project is adorable, but there's no way I could hot glue it together so it's a no-go. I actually need to make Reggie a small fleece bag (just like a big pocket, rectangle with 3 sides sewn up) to snuggle in but I'm pretty sure the results will injure him and/or myself somehow and I think glue would be toxic.

I got pics near my blackberry and a beer so you can see his size that I'll post later, I'd say he's about the size of a rat (although I hate to compare him to a rodent) and could grow as large as a chubby guinea pig. He'll always live inside because they prefer a temperature around 75-80 degrees.

Right now he lives in a clear Sterilite plastic tub. I'm going to get him a rabbit cage but the tub works great for toting him around during the day and I lock him in a pet-free, kid-free room at night. He's nocturnal and does most of his partying while we sleep. I need to get him a wheel so he can exercise, right now he has a cardboard wine tube, a block, a ball, a pile of fleece scraps and a small bean bag to play with and he hides out in a box-cave Mr. Ashley made him.

He's super easy to take care of so far, I just line the bottom of his tub in fleece liners that I cut out, dump it in the morning and replace it with a new one and wash the used ones.

When he's relaxed, his quills feel like a bristle brush and he doesn't mind me petting him. When he's annoyed, he huffs and puts them up and pulls the ones on his head over his eyes. Then he peeks out and determines whether he should come out or roll into a ball. If he rolls into a ball, he'll peek out and then suddenly pop un-done if he decides it's safe...it's seriously the cutest thing ever. It's like living with a cartoon character. We're all totally smitten. You all need a hedgehog.

Pearl is also starting to come around. With me more than him, but that's okay. She's not aggressive towards him, just wants nothing to do with him.

im so stoked you finally got a hedgehog. i wanted one and came really close to getting one until i heard all these gross stories from my friend about how his used to roll around in his poop. yuck!! so, i waiting to see if reggie does this gross stuff too or if maybe his hedgehog was just retarded or something.

We have these bath wipes for the dog. I'm sure you could use them on him, too. We got them at Walmart in the pet section.

Your hedgie will never get to the size of a guinea pig... always about the size of your hand.

Get Reggie and exercise ball like for a guinea pig and let him tear around the house. Mine love the exercise wheel too!

Feed him a Mealworm and make his day! Gross, but so worth spoiling the little guy.

Here is where I got most of the food and stuff for our hedgies:
http://www.exoticnutrition.com/

Oh, and if you want to laugh your ass off, they can swim, so fill up the bathtub about 4" and watch him swim!

Let me know if you need any hedgie tips :)

Your Pearl reminds me of my Bella. She pretty much had the same reaction when we brought Davie home from the hospital, and she's still not very happy with me.