So today I dropped off the Big Kid! Miss Sharon was very nice and gave him a hug hello. That made me feel good. She was also thin and was wearing great shoes. Clearly, we've got a winner! I made the introductions, showed him the potty, sat him at his table to color his picture, gave him a kiss and left. He never even batted an eye.

I, however, was overcome with tears in the hallway and almost completely lost it until someone distracted me. Turns out this snotty girl I used to know sends her kid there. Joy oh joy, I get to see her three days a week.

Then the little kid and I went on our walk. We walked around a lake and there was an alligator hanging out near one of the shores. I knew chances were he wasn't interested in me in the slightest, but he had me nervous and I swear I would've done a couple more laps if he wasn't there. I'm totally kicking ass on the Chaw Chub Club Challenge, by the way. Those bitches might as well just send me their money now.

He looked up and made a weird, thoughtful, sad about something sort of face. I came in and sat down and Miss Judy, the equally awesome assistant, pointed me out to him and he gave me a small nod of acknowledgment and kept watching her. She then told all of the kids to pick a book and look at it until their parents arrived and he ran to the bookshelf, chose a book and asked her if she would read to him. Maybe he was sad to see me?

I asked the teacher how he did and she said he did great and that he was very cute. I guess she wouldn't tell me if he came out of the bathroom with no pants on or told someone his penis was feeling pretty big. As I sat and waited while Miss Judy explained sonic boom to the kids (I shit you not), I overheard the following conversation:

Clueless Mom: (picks up papers from kid's folder, looks at them) Um, excuse me?

Miss Sharon: Yes, hi! How are you?

Clueless Mom: Are you teaching the kids to write from right to left?

Miss Sharon: Right to left? No. We teach them to write the correct way.

Clueless Mom: Because I'm looking at this paper and he wrote his name right to left and I know another little girl that goes here and she does that too sometimes. I thought maybe it was a Jewish thing?

Miss Sharon: A Jewish thing? No, that's very typical at this age. We just had them write like they normally write to assess where they are at with writing skills. We didn't do a lot of writing today, it being the first day and all.

Clueless Mom: But don't the Jewish read from right to left? Or something like that? I thought that was why.

Miss Sharon: Ahh, that thought hadn't crossed my mind. No, we teach them to write like everyone else.

LMAO. Hello clueless. I'm no expert on the Jewish stuff, but I look like one compared to this moron. Although there is some Jewish reason I don't have to pack a snack on Friday but I don't know why or what it is called. I also didn't know they don't mix meat and dairy. I'm learning though, I'll be an expert in no time.

Miss Sharon hugged the Big Kid and I took him out to the car where I gave him a bear hug and a big kiss and excitedly asked:

Ashley: How was school?

Ashley: What do you mean, you don't know? Wasn't it fun?

Ashley: Well what did you do?

Ashley: Come on, Big Kid, think of everything you did and tell me your favorite.

Ashley: That's all? What does that even mean? What else did you do?

Ashley: But I want to hear about your day. Was Miss Sharon nice?

Big Kid: YEAH! And Miss Judy is my fwiend.

Ashley: Oh good, I want to hear all about it.

Big Kid: I already told you already. No more.

Ashley: Did you go outside?

It is really weird that he has gone somewhere and done things and had experiences I know nothing about. I wan't to install a nanny cam on him or something. I want to know, damn it!

Look what I packed him for lunch (because I'm a GOOD mom): 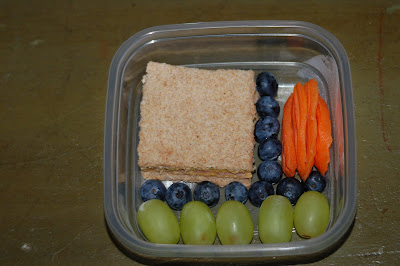 For anyone studying the background, it's an antique pie safe. So it's supposed to be shabby. It's on purpose. Anyhoo, I was inspired by this blog. What a fun idea!! I love the whole "Bento" concept and I'd like to eat this way myself. Why shouldn't it be fun? Plus, you know the other kids at the lunch table are going to be way jealous. HaHA! I also packed a snack because that isn't much food.
So this is my new hobby. I bet it doesn't make it 'til Monday even. But right now, I love the idea. Tonight I even used a star shaped cookie cutter to make cucumbers and tomatoes into shapes. I then lovingly presented it to the Big Kid:

Ashley: Cucumbers and tomatoes! I made it for you!

Ashley: But why not?

Ashley: That's mean, I did this to be nice.

Ashley: TIME OUT YOU BRAT. The little kid can eat the stars.

little kid: (Throws them angrily to the dog and smiles at me defiantly)

After the dog ate it the Big Kid was desperate for some of his own, but see how they treat me? See how I'm totally underappreciated? It's just not right.

So I'm concluding that pre-k went pretty well, although I really know nothing about it other than that tidbit about Art the Dog and that the Jewish teachers write like everyone else. We'll try again Friday.
Posted by Unknown

LMAO at the clueless mom. But seriously, someone reads things from right to left. Who is it? (Omg, I'm a clueless mom....)

When you say "antique pie safe", do you mean a locking cabinet? For pies? Why did people lock up their pies in the olden days?

Jewish people don't mix meat and dairy? So no cheezy Hamburger Helper? Is this true?

I think if Jewish people are reading Hebrew, they MAY read it backwards (don't quote me on that one, but many ancient languages are read from right to left). Also, pretty just that oriental languages are read that way. Doesn't much matter because people reading and writing English all do it the same....you don't write English backwards just because you happen to be Jewish (or Japanese).

I tried to make Bentos for my kids at play date today. My daughter is 2 so I cut her sandwich with a cute butterfly cookie cutter. My son it 10 and I thought he would be thoroughly embarrassed, but once we got there he wanted to know why she got a cool sandwich and his was just cut in half. Great. Now I look like I love one more than the other.

I think it's funny that the jews are teaching your son how to speak french...

I also meant to comment on the Bento Box lunches. I LOVE this and am totally stealing it from you. When the kids went to preschool last year, I did my own "Lunchables" with small portions of several foods (ham, cheese, crackers, fruit), but never in such a cool presentation like the Bento Box. I am inspired! Thanks for sharing that one. I will be spending a ton of money on egg and rice molds and funky cookie cutters, and then of course those things will go in a drawer and never be used again.

To quote someone I really admire, "It's all cwazy... Dat is not wight."

Honey, you've lost your mind. Skip the bento box thing, because they really don't appreciate it. Find yourself some good books and hunker down for the winter. Enjoy your quiet time!

P.S. It's Hebrew and Arabic that are right-to-left. Clueless Mom was right, but she's still clueless for suggesting that they're teaching her kid how to write in ENGLISH right-to-left.

By the way, when I saw your lunch picture, I totally thought BENTO!!!

Oh, I totally get the "I don't know" from my 4 year old big kid everyday. I know the Catholics are teaching him something, but he claims nothing..... Glad pre-k is going well for Big Kid.

Ya know what's real?
After I checked out the snack, I totally checked on the background and thought 'That cannot be her counter' then glanced down to continue reading, right at 'For those checking out the background..'

Oh, crap! Your as usual blog entry is stressing me out because my dd starts pre-school next week. The kids have to write their name? My daughter cannot even draw a circle-- letter formation is not even on the horizon. That is what I get for not letting her watch Sesame Street.... Maybe I'll teach her Hebrew...
Nic