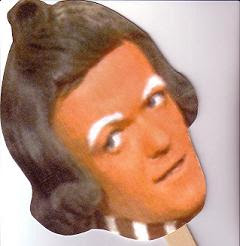 So the little kid had his 9 month old appointment today and he's been diagnosed with a rare form of OompaLoompaitis. Apparently it happens if your mother feeds you too much carrots and squash (yes, yes, all my fault). Seriously, who the fuck knew??? His nose is orange and now that his pedi pointed it out, all I see when I look at his sweet little face is his yellowish/orange honker. He should be back to normal in about 3 months if we lay off the orange foods (THREE MONTHS PEOPLE. THREE MONTHS OF LOOKING AT AN ORANGE BUTTON NOSE)

Turns out I can't call him fat ass and porker any more, he's only 50% in his weight percentile and 50% in his height. Damn near perfect, no surprise he's mine (except for the orange nose and bad attitude). He got a shot and didn't even cry. Damn kid cries for 80% of the day, but a stranger jams a needle in his leg and he's fine with that. Punk.

The pedi also examined me when I told him I was having chronic sinus issues but was afraid to get on antibiotics because I don't want to deal with thrush. Something about having your nipples feel like they've been mostly sawed off with a plastic butter knife and still allowing someone to suck on them and occasionally bite them just doesn't sit right with me. I don't know, it was nice of him and all, but it was weird having my sons' pediatrician grill me about the color of my snot. He really didn't seem satisfied with my answers, but in all honesty I don't study it.

The big kid was a real asshat all day. I don't know what the hell his problem was but everything was a fight. Real sassy, argumentative, confrontational...it's not my fault, he makes me that way. Sometimes you have to laugh at the total unreasonable, insane ramblings of an almost 4 year old, at which point he screams, "IT IS NOT DUNNY". To which I respond, "It is pretty dunny." That seriously pisses him off. Punk.

I'm tired and so glad for a three day weekend!! I'll be on the boat tomorrow, at my parent's for steak/swimming/horseback riding on Sunday and probably shopping on Monday. Hip Hip Hooray!!
Posted by Unknown

You are toooooooo freakin' funny. I love you and your punk kids. Tell that sassy big kid to 'shape up or you're sending him to Canada.', the land of germs and good pot.

oh..and sometimes I think about you holding my penis while I pee. Then I shake my head and remember that I don't have one. Oh well. I am sure we could think of something for you to hold while I pee.

I love you too, you big freak.