The Key to Organization, Happiness and World Peace 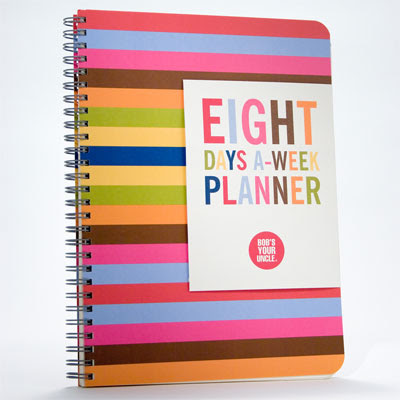 A fun little bonus for today, just in case I die of mold poisoning during the night.
As a lister (that would be someone who loves making lists, even moreso than accomplishing things listed on said lists), I love notebooks. The thought of a notebook/planner/list making combo is so exciting I feel sick (true, I did feel sick before I found the notebook but this is a different kind of sick.) I know Mr. Ashley is not going to approve of another notebook purchase, especially since the last "House planner" notebook I bought is still sitting untouched. I can tell this is the notebook that would really change things though. He would say $16 is a lot for another notebook, but it is a lot if it would CHANGE MY WHOLE LIFE? $16 to change my whole life. How is that not a bargain? Here is the Official Description:
Product Details
If you honestly can’t even remember the last time you looked at your calendar and realized you had no plans, the Eight Days a Week Planner from Bob’s Your Uncle is just what you’ve been looking for.
Designed for those of us who don’t get overwhelmed by being overbooked, the Eight Days a Week Planner has room for all your Monday through Sunday plans, and then an extra column for your Someday plans.
It’s spiral bound so it opens flat, and since you fill in the dates The Eight Days a Week Planner is ready to start whenever you are. Measures 7” x 9 ½”
*A Little Trivia From Jane: “Bob’s Your Uncle” is a phrase commonly used in Britain to indicate success will come easily. It’s reputed to have originated from a 19th century politician, named Robert, who assigned his inexperienced nephew to a prestigious post in government.
http://www.seejanework.com/ProductCart/pc/viewPrd.asp?idcategory=13&idproduct=518
I love the whole "Bob's your uncle" thing. Why the hell don't I have an Uncle Bob?
Posted by Unknown

Email ThisBlogThis!Share to TwitterShare to FacebookShare to Pinterest
Labels: Because Uncle Jim isn't doing me any favors

I seriously thought I was the only one who had a ridiculous love for notebooks.
I am not a lister but I just love writing in the second page (I never use the first one) of a nice, fresh, new notebook. I also love the organization that notebooks like this give- I am totally getting it!
xoxo

Thank u ;-) take a look this emo boy style on this blog:
http://www.emo--boys.info