Hallelujah, Can you hear the angels sing?

I shit you not, two minutes after I saw Monogram Momma’s St. Anthony comment I went to feed the little one, accidentally dropped the baby food jar lid and found the remote control in the wine chilling bucket in the pantry. Who would’ve thunk it? I was ecstatic, first of all because I found the remote, second of all because Monogram Momma (who is the woman I aspire to be, so far I’ve only gotten as far as starting a blog and begging Mr. Ashley for monogrammed towels, but in all fairness I just found her a week ago) was instrumental in bringing the remote back to where it belongs!! I guess this means St. Anthony is eligible for the reward!! Yay, yay, yay!!

The little kid was pissed but fine after an extra feeding and Mr. Ashley got things under control and took the big kid out of here. So I sat down, remote in hand, feet on coffee table, hit refresh and.......MOTHERFUCKER, my internet was down. So here I was, in a quiet (messy) house, with nothing (fun) to do. Boy, was I pissed. So I sat down and watched Memoirs of a Geisha, because it is on my list of things to do. It was a good movie, I almost thought I wanted to quit the whole SAHM thing and be a Geisha girl, but now I realize I just really want a Kimono and someone to dress me. And maybe an opium pipe. That's all. 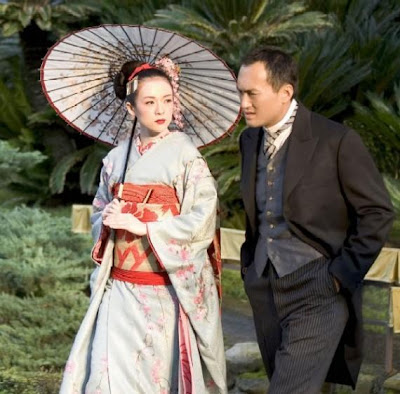 What do you think? Will it cover my muffin top? Time to trade in my Old Navy lounge pants and tank top (aka my "uniform for life") for a kimono and obi? There is also excellent butt coverage and no one would have a clue that my upper arms were flabby. It's a thought.

I've also been in touch with Carol, from Carol Lee Designs (You know the "sucks to be you" card girl). Here is a link to her blog: http://www.songthatneverends.blogspot.com/ Her little one was born one day after mine! Okay, I still plan on doing some online shopping show & tell tonight but Mr. Ashley is asking about dinner (yeah, what about it?). He refuses to consider blogging "working" if I'm not being paid. What a rip. So I'll be back later.
Posted by Unknown

Email ThisBlogThis!Share to TwitterShare to FacebookShare to Pinterest
Labels: No more Noggin