So today we went to the new Outdoor World. It was ginormous and had floor to ceiling aquariums and glass elevators and a restaurant and dead animals and camoflauge as far as the eye could see. But the very best thing they had? Eliza B sandals!! I LOVE these! Where have I been, folks? Covered in baby puke on the couch, that's where. 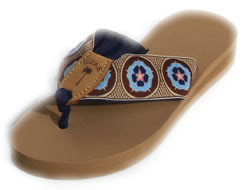 Eliza B Sandals I cannot find the exact pair that I got, but they were navy blue with pink whales and ribbon. I agonized between those and a pair that were black with white jolly roger pirate thingys on red ribbon. Now that I've gone to their site I want about 80 more pairs, but yowza $50 is a lot for flip flops. Plus I live in flip flops and I've recently made a personal resolution to try to put some shoes on and dress up a little every now and again. I've totally sucked at that so far and these won't help. I am definitely, without a doubt getting those pink pirate ones! At Dead Animal World the sandals were only $29.99 and they had lots of cute ones but not quite as cute as the ones on the site. They are a full size smaller than your normal size, but they are comfy and so, so cute. They made my day, that is for sure. They have really neat cork bags too: 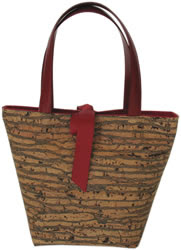 Sucks it's $80. It is that cute, I'm just so cheap. And I don't get out much. But I love their stuff and I also love the name Eliza. If I had a whole herd of girls, one would be Eliza. First I'd have Bailey, then Amelia, Evangeline, Charlotte (Charley) and then Eliza. So if I had five girls, I'd have an Eliza. Okay, we've gotten slightly off track here but I love baby names.

We had lunch out and the little kid had to make contact with everyone within a 1 mile radius. A freaking gaggle of waitresses cooing over him while I am sitting there sweating and thirsty after waiting 20 damn minutes for a table and really, I just wanted a drink. I know he's cute, he'll still be here when you get back with my beer. 99% of people that walk up to talk to the little kid don't even acknowledge the existence of the big kid and he's pretty damn cute himself and smart enough to notice their total lack of interest in him. I know people are just clueless but it's a pretty dickin' move, in my opinion.
We decided to see Shrek 3 after lunch and the little kid slept and the big kid loved it! I slept a little too, but what I saw was good. It was nice and dark and cool, there were no kids on me, I pretty much fell asleep right away. I woke up with a start because I heard a baby crying but it was Shrek dreaming about having a baby. The music was really cute and there were lots of clever little jokes. At 30 freaking dollars for 2 movie tickets, 1 coke and a bag of Twizzlers, I could've gotten another pair of Eliza B's, but at least I got a nap out of the deal.
All in all, it was a really good weekend. I hope you all had a Happy Memorial Day too!!
Posted by Unknown

Email ThisBlogThis!Share to TwitterShare to FacebookShare to Pinterest
Labels: I need to win the lotto