Holy crap, it's like I'm being sucked into a vortex of Supermomdom or some such shit. I am TIIII-ERD (That's tired in a long, drawn out, dramatic fashion). I also have a headache but that may because I ate some moldy bread today. O, The Glamorous Life of Ashley!

So yesterday I went to Tumble Time and fell in love. Her name is Angie and she seems cool like me (that is so rare, really it is). We talked the whole hour and then went out to lunch afterwards. It was so nice! I invited myself over to her house for drinks, so we'll see how that goes.

That alone was huDgely productive, going to Tumble Time (at the Godforsaken time of 10:00am, who is out that early?), making a friend and then going to lunch but then....then I decided to go bathing suit shopping. It had to be done. I don't know why I got brave enough to do it with both kids, but I admire myself greatly for doing so.

We have a new Loehman's here, have you guys been there?? Wow!! All kinds of expensive designer clothes for so cheap!! I really love this place, I was in there for hours. I tried on 22 different items. I know this because they would only let me take 8 in at a time (I hate this bullshit, I swear it is a scam to see me bra-less, as if I'm going to get 100% fully dressed to come out and retrieve my next 8?).

I realized I had my camera and wanted to take a picture of my ginormous pile of clothes but the fitting room lady was probably already pretty irritated at me since I had been locked in the handicap dressing room for an hour (Hey, if bathing suit shopping with kids isn't a handicap, what is?) and since I had begged and pleaded for her to let me take more than 8 items in twice and since the big kid was talking non-stop, including a running commentary on my clothing choices and how if your tummy hurts and you go poo poo that your tummy feels better. So I settled on just taking a photo of one of my piles. She was probably seriously wondering what the hell I was doing in there with two kids, a pile of bathing suits and a camera.

If you look closely you can see my new flip flops! You can also see that I was delusional just long enough to think that my fat ass would look okay with JUICY jiggling across the back of it. Not so much. 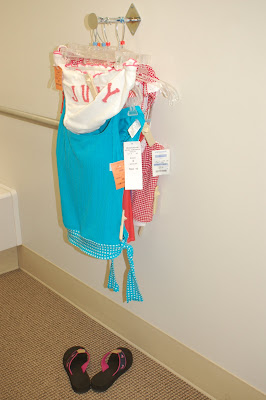 I also loved this little number and in 10lbs it could be within the realm of possibilities (however it will surely be out of stock by then). It was also made by Juicy and retailed for $200+ but was only $60 at Loehman's!! I could look like a fat, saggy Daisy Duke while I'm out on the boat!! 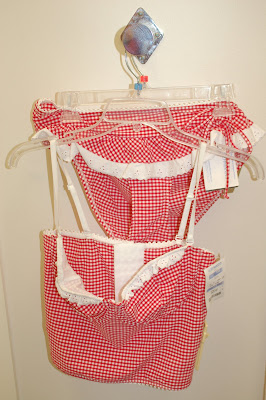 Here is a taste of the chaos that was my dressing room (and a peek at the cute pink and green seersucker Lilly Pulitzer pants I tried on). Don't look at my fat arms:

I told you not to look at my fat arms, you shithead!! I know you studied them intensely and thought to yourself, "Geez, if she'd get off the computer and go for a freaking walk, maybe her arms wouldn't look like ham hocks." Asshole. Also note my rockin' Phil and Ted's E3 doubles stroller in the background. Yes, it is as awesome as it looks.

Anyway, can you believe I found 2 bathing suits??!! Hip hip hooray! Nothing cute enough to post a photo of, but they fit and that is a big plus. I also got a DKNY halter top that I wore today. When I cut the tags off, I realized it is an extra small!! I am an extra large. I understand vanity sizing, but unless DKNY is making a line of clothing that would fit Gilbert Grape's mom, I don't see how it is an extra small. But oh did I feel tiny once I realized I was wearing an extra small!! It looked good too, until the little kid ripped one of the embellishments off of it. Damn kids. I got 2 suits, the shirt, and a headband for $70. Me likey, me likey my friends. All with two kids along for the ride and with a minimal amount of pain.

Now I'm tired and I feel like I'm going to puke and my head's going to explode and I'm wondering if eating moldy bread can kill you. Maybe I could get a court ordered quarantine? It sounds pretty good right now. I just thought I'd share a rare, real life shopping adventure with my virtual shopping friends. And yes, I'm pretty sure two playdates in two days, lunch, and bathing suit shopping does qualify me for Supermomdom.
Posted by Unknown

*clapping* Stellar entry. I can't believe how many days behind I got. LOL at your fat arms. Well, not at the fat arms, but telling me to not look and then calling me out on the fact that I immediately looked after you told me not to.

Mr. Marcelle told me today that Victoria's Secret was having a bathing suit sale. He then pointed out a model in the magazine and told me that I could look like her if I didn't stuff my face with so many peanut butter and jelly sandwiches. Asshole.

Well tell Mr. Marcelle if you looked like that, you'd be sunbathing on a Greek Island with some young, gorgeous, mute, millionaire.

Mr. Ashley told me I didn't need a whole bag of licorice Nibs last night, he was wrong...as usual.

btw, if you were really my friend wouldn't you tell me that my arms aren't fat and it's just the way I'm holding the camera??

Not sure if I mentioned this or not, but your arms aren't fat, I'm sure that it's just the way you're holding the camera.