Here's some chick pics and footage.

I know Henna is a truly pathetic sight, but she's looking good now. I didn't feel that I should leave her in the incubator because she was crashing around into the other eggs and her yolk sac wasn't entirely absorbed and was scraping against the wire floor. So I made sure the brooder box was as warm as the incubator but softer and moved her over.

I didn't want Chicka stomping or pecking her so I separated them and they were clearly talking to each other. They are together now, all snuggled up and friendly and Henna is fluffing up and her yolk sac is almost all absorbed. 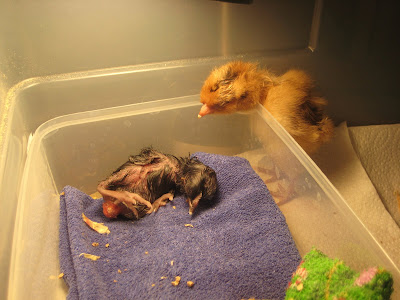 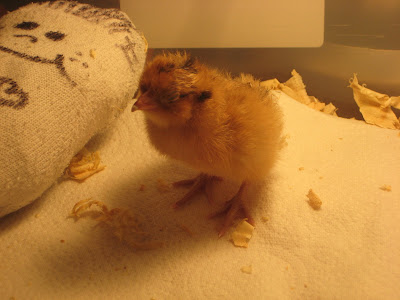 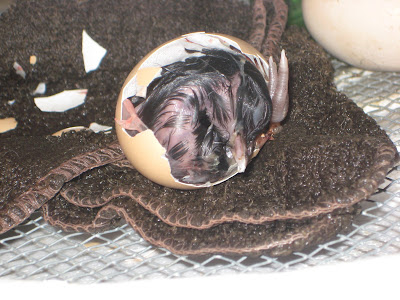 I think my incubator is a degree or two too warm, which would explain the early hatchers. I think my previous two attempts it was slightly too low because the first thermometer I had seems a few degrees off on the low side.

Next time I'll get it right.

Email ThisBlogThis!Share to TwitterShare to FacebookShare to Pinterest
Labels: There's always next time

I just showed your videos to Ray and Chay. They're thoroughly impressed!

Truly amazing! I have been waiting all day to see these videos. I feel like such a dork.

My cocker spaniel puppy goes ape shit crazy when he hears the chirping.

OMG! They are so stinkin cute! I just showed the videos to my hubby and he just looked at me and said "not a fucking chance".

Poor Henna. I'm so glad that I have real mother hens so I don't see them until the are fluffed up and running around. If it makes you feel better my one and only chick pooped on me today. :)

OMG Ashley. I love them. Chicka and Henna are totally BFFs. Can't wait to hear more!

BTW- I love BK's names for them. They are totally appropriate!

SO, SO CUTE!!! I love hearing their little peeps! I hate chickens, but I LOVE chicks.

I am such a proud aunt:)

That last video is one of the sweetest things, it is like Chicka is cheering Henna on saying"you can do it"

I was sitting here and told hubs "Oh I have to see if Ashley has posted pics of the babies" I showed the other videos the my son and he loved it, he will really love these with Chicka all fluffy. I forget to tell him her name he will love them both.

I'm with hippy_at_heart... my dogs go crazy when they hear the chirping. They intensely watch them wiggle about, then turn their heads when they chirp. It's quite a sight. Thanks for sharing the videos, can't wait to see more!

Too stinking cute! I had my volume up too loud though, and now Lola is looking for the chick at my house.

You've got chicks! I'm so happy for you!

I love the second video, with Chicka talking to Henna....and to see Henna move closer...so sweet.....

it _almost_ makes me want some! They seem like a ton of work though, and stressful, too...

My dh was telling me when he visited Portugal as a kid, he bought a chick at a fair for maybe 50 cents...he had to leave it at his aunts house...all of her chicks would pick on it, so they separated it...his 50 cent fair chick wound up growing up to be their best rooster!

They are super cute. I remember this in kindergarten science.

Congrats girl. They are adorable.

I love how the little yellow chick is so curious about the black one. It's like he's watching over him and cheering him on. I love how in the video he seems so encouraging and they actually seem to be speaking to one another! The first picture is my favorite. The lighting makes it look like the poor little Henna is in a NICU, and Chicka looks so concerned... so dramatic... and so, so cute!!!

Good luck with these babies!!

Awe. I bet lk is so excited.

LOVE your photos of the chicks. I am going to show my daughter when she wakes up from her nap. How is Henna doing???

It bet it is freaky to see their big feet coming out of the shell.

Ashley I am sooo happy you finally got your chicks! My two big kids will so enjoy looking at the pictures tomorrow!

Aaaahh! They are so cute! Hope to see more video. The kids are loving this!

the yolk sack is freaking me out...