So, last night we tried the Miracle Fruit Tablets. They aren't exactly the same as the Miracle Fruit, which alters the taste of everything, these are just a pill extract that makes sour things taste sweet.

First, we went to the store and assembled a smorgasbord of sour stuff, including but not limited to: 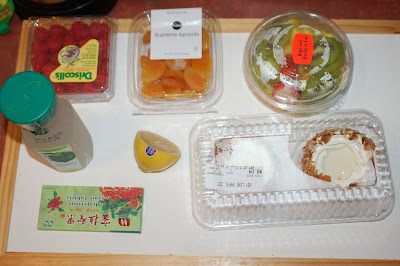 We each took one of the Miracle Fruit Tablets and let it dissolve on our tongues. A moment later I took a sip of my lemonade and it was the Best.Lemonade.Ever. Ever. Indescribable, my mouth is watering just thinking about it. It was just so perfectly sweet.

The Key Lime Tarts were weird, in fact, anything lime was. I could taste the whip cream and nuts but didn't really taste the Key Lime taste, it was just all sweet. Limeade just sucked. It wasn't sweet enough but with no sour taste it was just odd.

Kiwis and pineapple ROCKED. YUM! They tasted like the freshest, sweetest, most perfect fruits ever. Raspberries and apricots were good, the sour candies were great. The lemon tasted just like sweet lemonade.

However, all of this yummy heaven only lasted for about 10 minutes. It says 30-120 minutes, but not for Ashley. Mr. Ashley probably went 15 or so, but I knew exactly when the sour came back and was a little disappointed it wore off so fast. Also, you burn your tastebuds off without knowing it and your tummy hurts from eating so much sour stuff in such a short period of time.

So, it was fun and really cool and I'll eat the others in the pack too, but it wasn't earth shattering or anything. I'd still love to try an actual Miracle Fruit, or even better, attend a party, but all in all, it was pretty cool.
Posted by Unknown

hmm that is an odd little product! But so not good about the tummy ache :( I imagine that would make me have BAD heartburn!

It still sounds fun...even for 10 minutes.

I still want to try it. I have the worst sweet tooth ever. Sometimes I eat spoonfuls of brown sugar. Lots of em.

My bf ordered the Tablets off of the internet and I had REFUSED to try them until I read this post. I loved the kiwi and pineapple but I pretty sure that my dreams will include visions of Granny Smith apples. SO GOOD. However, I would say that it was a little awkward to just let it dissolve on your tongue. Thanks for giving me the courage!