One week ago today, I was in Woodstock, NY for cousin Julie's wedding (which will get it's own post, because it was special and deserves it's own spot).

First, let's talk about Woodstock, NY. It's...weird. Very weird. My Californian aunt used this adjective to describe every single thing in town. Multiple times. I think we all know that I fit in quite well among the weird, but I'm not sure I can recommend it to those of you huddled on the extreme right side of the closet. It's a VERY liberal town. They love The Gays. They smoke The Pot. They hate The War. They eat The Tofu. They do not trust The Government. They love The Buddhists, The Christians, and The Athiests equally. They are voting for The Obama.

I loved it. Except for the fact that I COULD NOT get a good meal in this town. What the hell. On our way to the Albany airport my mom and I stopped at a Ruby Tuesday because I was ravenous for something normal that had some flavor and was part of a franchise. 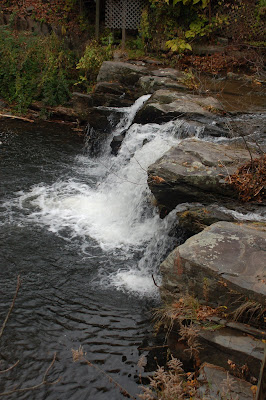 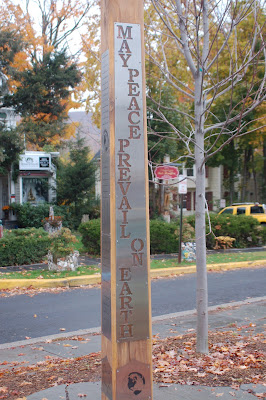 In the town square. 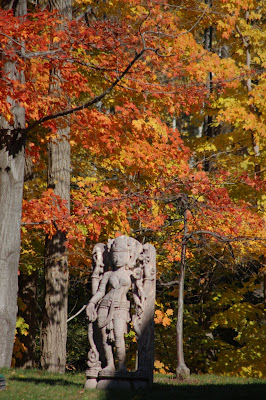 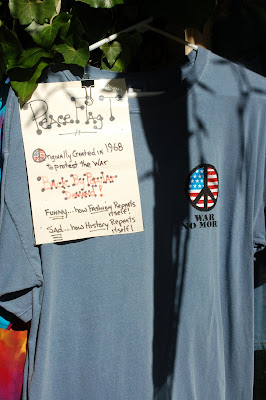 Peace Flag Shirt. Originally created in 1968 to protest the war. Back by popular demand. Funny how fashion repeats itself. Sad how history repeats itself. 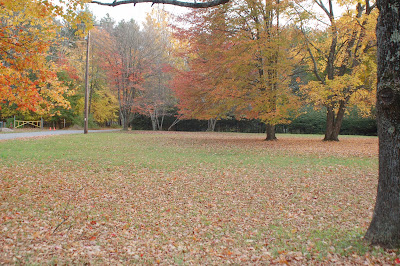 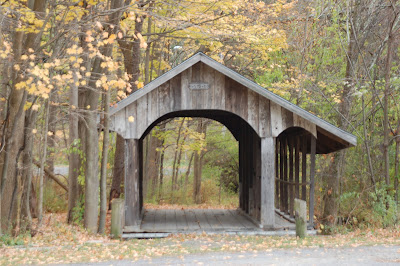 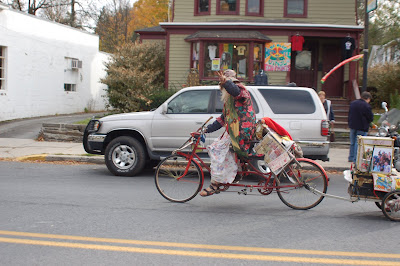 Lots of these sorts of people around. I think they just forgot to leave after the concert in 1969. 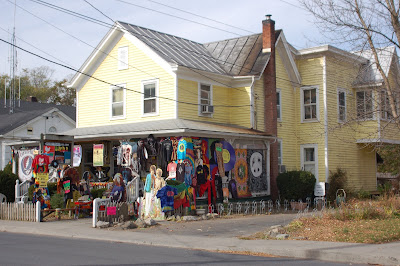 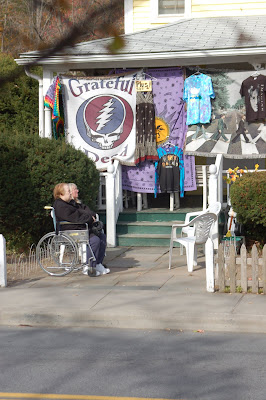 Is it awful that I found humor in an old lady in a wheelchair underneath a "Grateful Dead" banner? Yes? I know, I'm going to hell. I'll see half of you there. 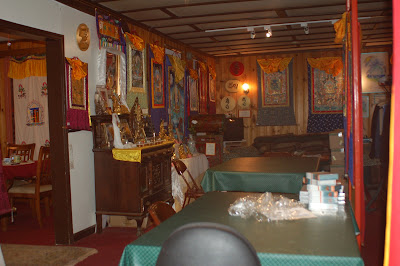 Inside of the monastery. "Weird," my aunt said. 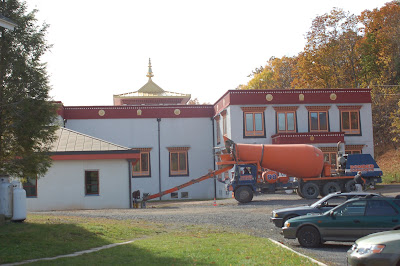 Outside of the monastery. I thought the concrete truck was very profound. Buddhists need expansion too. 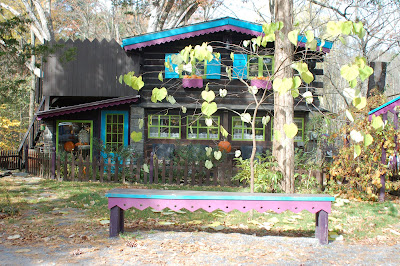 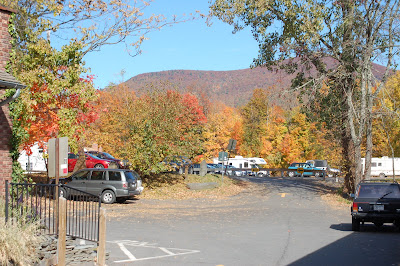 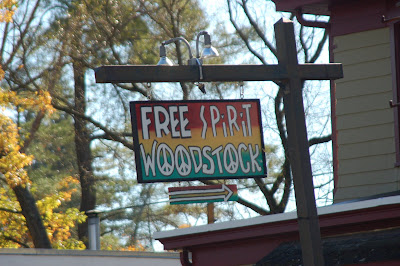 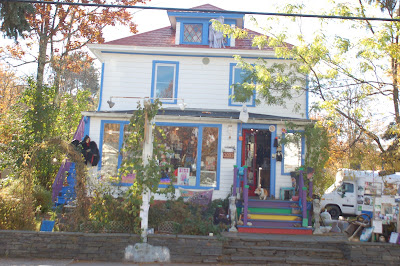 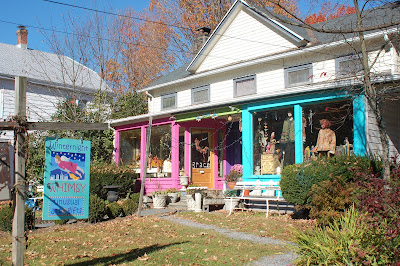 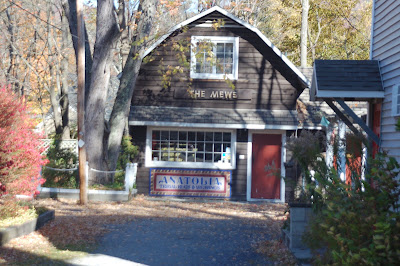 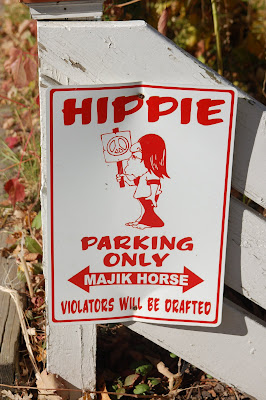 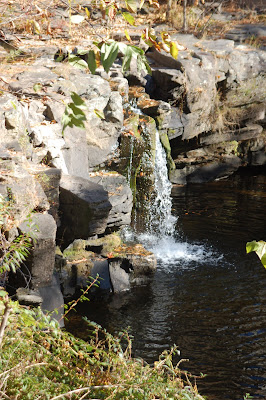 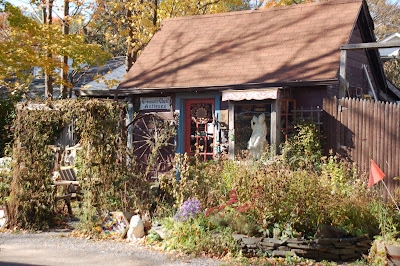 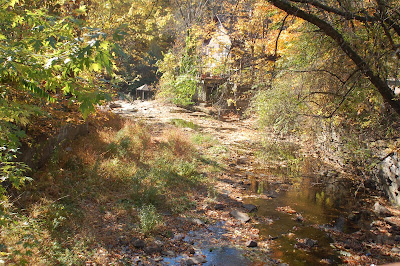 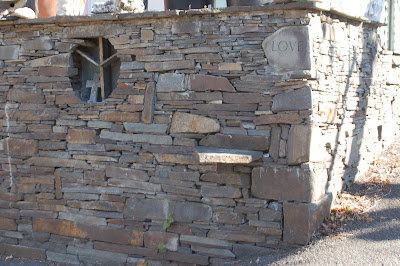 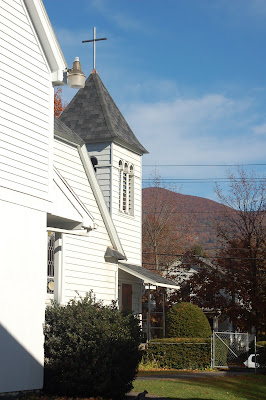 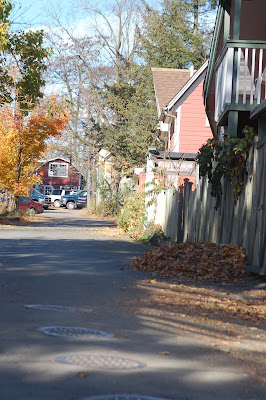 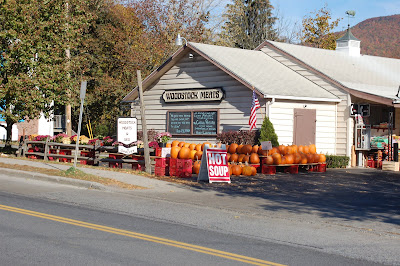 Really, a charming town. No traffic lights. Philosophical or just plain funny bumper stickers everywhere. A shaving cream fight in the town square every Halloween. Very live and let live. The leaves and the Catskill Mountains were GORGEOUS. You'll see some more in the wedding post.
Posted by Unknown

Email ThisBlogThis!Share to TwitterShare to FacebookShare to Pinterest
Labels: that will be soon I swear

That's hilarious! I love the statue of the Indian god. What a great place to visit...I guess it's kind of like going to Key West? Sorta? But hippier since Key West sold out a few years ago?

next time fly in and out of Stewart Airport in Newburgh...lots of great food on the way down, closer than Albany....

When I'm in a real funk, I drive up to Woodstock (about 1/2 hour) and just hang out....everyone somehow fits in!

I.want.to.live.there! some places have a Chinatown or Little Italy....this is like a "little Canada" (or atleast Vancouver Island) right here in the US! fantastic :)

They do not trust The Goverment. They are voting for The Obama.

They don't trust the Bush Administration. They trust the government just fine...

What a cool town! Beautiful pics!

Looks like home to me LOL (originally from the bohemian town of Saratoga). I just can't believe THE Ashley was so close to me, I live only 40 minutes from Albany. *le sigh* I guess I will have to wait until the Closet Cruise to meet you.

I love the pics! Looks like a great place to visit.

I love it! I want to move there (or at least visit!)

Ok yea it is weird, beautiful area but weird

I think that's where I will have to retire!

Coolio town, and if they didn't lean so far left that they can't walk upright, it would be just the place for me. Sort of like Coconut grove on acid. I love it!

Looks like a great place for me and my family too, we love all those things except perhaps The Pot. I'll have to put it on our places we need to visit.

Love your guy's Plex costume too!

Me not so good with the hippies, so temporary visit will be the way to go for me

Anti-government and Pro-Obama. How ironic.

Yep, I'm totally going to hell too. I thought exactly what you posted before I read it! I'm "weird" like that :)

They said that brown acid was no good. People should have listened. lol It's gorgeous there.

Thanks for sharing...love your descriptions. I think I would like to visit.

I've been there and it is a pretty cool place.

I love it when the right likes to tell people who have been screwed over by the government and therefore lose their trust, that they are "anti" anything. How dare these people find a politician they can trust! The nerve! Those pinkos! Wanting peace equals not being Patriotic?How does that logic work?

I live in Upstate NY- had no idea it was such a trippy town. I'm so taking a day trip soon!