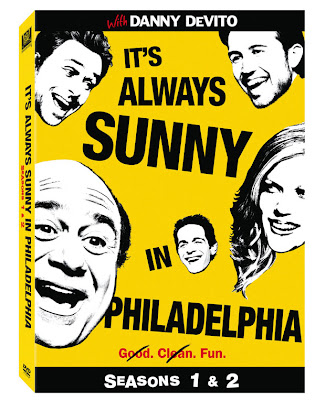 Can I just say that "It's Always Sunny in Philadelphia" is one of the funniest shows on television right now? I laugh out loud every single episode. I can't believe I don't hear more people talking about this show. So if you haven't seen it, watch it. It's on FX Thursday nights at 10pm.

Also, did anyone see the South Park video where they parodied Chris Hansen in "To Catch a Predator"? I seriously almost peed my pants. He kept saying, "Please, have a seat" and the voice inflections were dead on. We all know I think he's completely do-able, or we should know if we're loyal readers from way back. Even his cartoon self was cute. I got excited because I found a Youtube video of it I could post here but apparently it's been removed because of Viacom and their copyright regulations. Blahblahblah.

I don't really have anything interesting to say right now. It's 8am and I'm up with the kids because Mr. Ashley says it is my day to wake up with them. Technically, I think it is his day. He did get up with little kid 4:30am yesterday morning, but I think that counts as a middle of the night/sick kid wake up call. He got to go back to sleep and I had to get up at 8am yesterday, so I'm getting ripped off here somehow. So I've already cleaned up spilled milk, rescued little kid from the hinges of a folding chair and broken up two fights and I'm going to be alone with these brats all day while Mr. Ashley works on the condo, for the second day in a row. Lord help us.

At some point Joy had asked where she could send me something she thought I'd be interested in. I broke down a while ago and got an Ashley's Closet email address. I can't promise I'll remember to check it regularly but maybe if it was filled with treasures and love letters daily I would consider it. It is Ashleysclosetblog@yahoo.com. So feel free to send me naked photos of yourself or scandalous confessions or money.

Have a good Sunday. It's going to be a long one for me.
Posted by Unknown

Email ThisBlogThis!Share to TwitterShare to FacebookShare to Pinterest
Labels: email me one million dollars please

Your blog has such a great 50s vibe!

Ok, if you've watched every episode your going to know this retarded song:
DAYman! Fighter of the NIGHTman! Champion of the Sun! Master of Karate & Friendship for Everyone!! (aaaAAAaaa)

P.S. Saw your little bro out last night & he was telling me he "helped/supervised" Mr. Ashley all day with the new wood floors in the condo. I guess at least he's helping fix the mess his skankfriend made.

I will send you the pic I hope you find it funny like I did.

just fyi, you can find any south park episodes on www.allsp.com! i think the episode is called "le petit tourette".

ps i LOVE your blog. i'm 20 years old and i think you are hilarious.

i tried watching that show but didn't like it. i will have to try it again.

i hear you about the getting cheated with the turn taking on waking with the kids. somehow my day i wake at 7 - his day he wakes at 8 ???

Mr. Ashley sucks. Not really, but I'll always take the girl's side in an argument.

I have a co-worker who loves Its Always Sunny...she's been nagging at me to watch it for ages. I showed her this post yesterday and I think she had a mini orgasm. For what its worth, she now loves you more than me and I'm not sure how I feel about that....at my place of business, I MUST be the funniest. I'll drop you an email later with more coke points. I think I have a problem...they have a 12 step program for coke addiction?