Needle and thread do not appear to be friends of mine either (see previous entry about heat bond failure).

What was kind of cool is that I got down my grandma's old sewing box for supplies and it was neat to see all of her old buttons and spools of thread and to use needles that had been threaded by her (yes, I'm too lazy to even thread my own needle). The box still sort of smells like her too, so that was a nice memory, albeit far too mushy for here.

I *believe*, and the true test will be tonight, that hot glue may be my friend. Let's hope so because I glued that son-of-a-bitch up one side and down the other.

little kid is in a real mood today. I think I've got about a .5% chance of getting him to wear his parrot hat tonight. Fucker. I worked hard on that hat. I HAND SEWED the beak. I turned it inside out and back right side out and stuffed it and everything. No glue, no heatbond. It is the proverbial cake topper and if I have to, I will hot glue it to his head.

I was going to iron "wench" onto a shirt and wear this flow-y cotton skirt I have with a bandanna and hoop earrings. But I can't find a shirt or a bandanna and I'm really kind of over the whole Halloween thing already. So that will probably fall wayside along with the tote bags and pirate ship wagon. They were awesome ideas though. I did try the whole ship thing, but me and box cutters just don't mix and Mr. Ashley wouldn't stop working to help me. Something about a career and a paycheck, blahblahblah, I don't know. Way to ruin Halloween Mr. Ashley. Kidding, kidding. (mostly).

Here are some preview pictures, since I have a photo shoot early in the morning and I know you'll all be chomping at the bit to see the Ashley boys decked out. 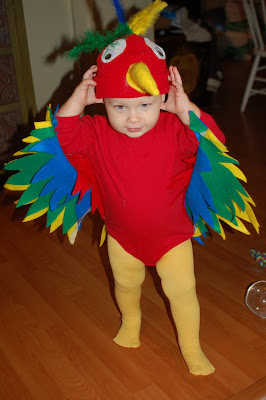 Here's the one millisecond that the parrot hat did stay on his head. He also has tail feathers. Hopefully, I'll get better pics tonight. I'm also hoping that I can get him to wear dish gloves on his feet so they look like bird feet, but he has hidden one of his Crocs and I'm not sure I can make it happen with his tennis shoes. That's right, rubber gloves on his feet because he doesn't look ridiculous enough as is. 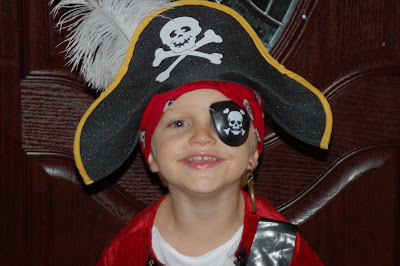 and the raddest pirate ever.

Okay everyone, I'm back to the battle between me and this dirty house. I'm losing, as usual. You all have a happy Halloween and hope for little kid's sake that he wears that damn parrot hat.

P.S. Any snapshots that I share are not indicative of my talent as a photographer. Unless I'm doing a little "photoshoot" sort of deal, I'm using on camera flash and my pics are just ordinary snapshots like everyone else because on camera flash sucks goat balls.
Posted by Unknown

Email ThisBlogThis!Share to TwitterShare to FacebookShare to Pinterest
Labels: i will hot glue it

Those are seriously amazing costumes!! You should be proud. I can't wait to see BK's entire outfit and LK as a parrot is just awesome!
*golf clap*

You better win some serious KUDOS for those, they are AMAZING, but I am NOT surprised!

you did great!! i'm really excited to see the pics from tonight, you haven't given yourself enough credit...awesome job, momma!

LOVE the parrot!!!! You do not give yourself credit, it came out great!

Hope LK wore the hat or at least recovers from the glue gun burns quickly. ;)

I think they both look precious!

LOVE the parrot!! And the pirate? Not disgusting in the least!! (He looks pretty delighted with his costume, BTW.)

Seriously, the chunky baby legs in tights just cracked my ass right up. I think you did a bang up job.

Yeah, my hubs uses the "I gotta work" excuse too. Whatevs.

They are SO CUTE!! The parrot is fantastic and I can see your disapppointment in him refusing to wear it! It's too adorable!

OMG those are great I can't wait to see more pics of the costumes you did an awesome job!

The costumes turned out awesome!!!

The most adorable parrot costume ever! WELL DONE!

SOOO cute! You did a great job for someone who claimed to be such a lazy slacker!?!

I love the parrot, you are a most impressive non-sewer. I think the feet would be cute but you are right, yellow tight are good enough. I LOVE IT!!!! Arg...to the pirate! Hope the family had a blast.

I'm so impressed by your domestic prowess! You are a total poser though - you talk about being lazy and the Anti-Super-Mom but in actuality, you kick ass. Damn you, making the rest of us look bad. Thank you for not calling me out on your blog for putting my biggest kid in the same Halloween costume 3 years in a row. I do feel the need to confess, though, since you've made me feel guilty, so I'm calling myself out here. I feel the same way I did when you told me I wasn't allowed to use peanut butter to frost W's birthday cupcakes. Shame on me. And kudos to you! :) I LOVE LK in the yellow tights. Oh, those chubby little legs. Can't wait to see more pics.

I absolutely LOVE the parrot costume. You are one domesticated biyatch.