Holy hell, it is happening, it is happening! The kids are in bed (barely) and it looks like this day is actually going to end. I know, I know, tomorrow is another day, but we'll deal with that then.

The pool playdate was good, mostly. For some reason the big kid decided he was terrified of water today and had no faith that his floaties would hold him. I have no freaking idea what is up with that. So basically he acted like a wuss and begged, whined, squealed and panted for me to hold him, hold him. The little kid actually needs to be held (obviously) but he doesn't think so, so while I've got one clinging to me, I've got the other one leaning forward and trying to swim off the whole time. Add 8 other kids, half of whom have water guns, and you've got one relaxing day!

Speaking of the little kid, I'm thinking of having poison control's phone number tattooed on his forehead. I think he has a death wish. I know his life sucks, but come on now...trying to chew Magic Erasers, eat butt paste and suck on dishwashing detergent? It's not cool. I can't watch him 24/7 and I swear the big kid never pulled this shit.

So we swam all damn day and as soon as I get them home, they both start acting like punks. The little one didn't want to nap and the big one would not stop running his mouth. He finally earned himself a time out and while he was in there he tore up his room. Specifically he took all of the bins that hold 90000 little pieces of crap and tossed them all over his room. This is a new one. Uh-uh.

Me: BIG KID, WHAT HAVE YOU DONE?

Me: This is not acceptable. You are going to pick all of this up.

Big Kid: Emawee did it.

Me: You are telling a fib, Big Kid. You did it, you're cleaning it up, don't come out until you do, and get your hands off of your penis.

Me: That's 1. You are not going to sass me. Clean it up this second.

(He knows I hate it when he calls me by my name. From about 18 months to 2.5 he only called me Ashley, I have no idea why. It was embarrassing and hard to explain. Luckily he quit, but still likes to pull it out when he's talking tough.)

Me: You are supposed to be cleaning up.

Big Kid: Um Mommy, talk to me for a second. Just talk to me.

Big Kid: You see dese books, and dese bins and dese cars and dese stuffs everywhere? All of dis stuff all over da pwace?

Big Kid: You cwean this messy stuff up and the Big Kid-y will go pway. Okay?

Me: NO!!!! CLEAN IT UP. You can't come out until you do. You can either clean it up quickly and come have fun or you can just stay in this messy room and never come out again.

Lather, rinse, repeat and throw in some kicking, crying and screaming for so freaking long I can't even tell you. There was definitely a point when I was just ready to throw in the damn towel. I was seriously sweating it and wondering what to do if he just continued refusing. Good God, that kid is stubborn as a mule.

So during all of this bullshit, I still managed to make dinner. While I was cutting up a bell pepper, I had an ingenious idea that I thought would get me some frame-able art and earn some good mom points (although I really don't feel like they deserved a good mom today). Vegetable stamping. I got him started after dinner and was delighted with what I had done, and then.... 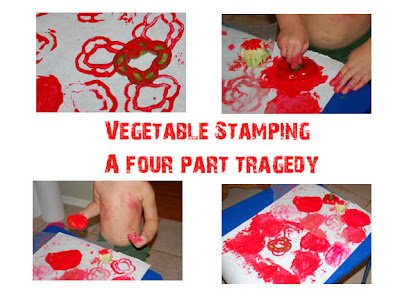 So, clearly not frame-able art (so little is). There was serious potential there, I did a kick ass job cutting that bell pepper up if I do say so myself.

So yeah, those damn kids pretty much screwed up my whole day. Tomorrow I'm braving Tumble Time again (and it's summer, so dumb ass big kid siblings will be there) in the hopes of seeing my new girl crush (who I have neglected to call and just scribbled an email to about 5 minutes ago) and then we're heading over to the Jewish Temple to check out their preschool program. No, we're not Jewish, I just figure putting my kid in Jewish Preschool would make for some good blogging material. Stay tuned...

Email ThisBlogThis!Share to TwitterShare to FacebookShare to Pinterest
Labels: Forget About Art School

LMAO! I love how you care enough to scrapbook it!