You Should Be Jealous

So yesterday we went on the boat, as you all know if you are loyal readers like you should be. We didn't go to our normal island, instead we went to a nearby sandbar that had recently resurfaced. It was heaven!! The water was warm and shallow, it was uncrowded and beautiful. I also brought a bottle of wine and I'm never drinking another beer on the boat again. Screw that, wine is where it is at. All in all a great day and I thought it would be fun to share pictures: 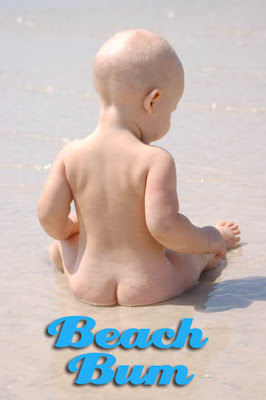 I stripped the little kid down and let him play naked in the warm shallow water. My mom, who is appalled by naked children of any size, kept telling me people were staring. There were like 10 people on the entire island and if they were staring, it's because it was the cutest freaking thing they had ever seen and they wanted him for themselves. 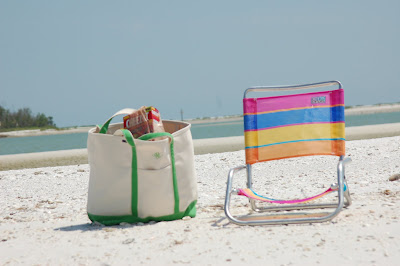 The Extra Mother Fucking Large tote bag I was telling you all about. This photo still does not do it justice. I could fit that chair in that beach bag. 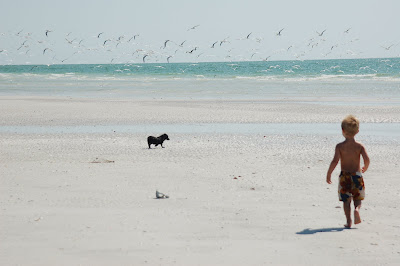 The Big Kid and his dog, terrorizing the bird population.

Various Wild (and not so wild) life 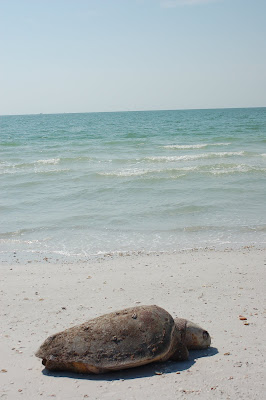 The dead sea turtle. This was so sad I can't even joke about it. You can tell he lived a long time. I didn't take the Big Kid to see it, not because I thought he'd be sad, more because I was afraid he'd try to ride it or something. My mom touched it (she just wanted to see what it felt like, freak) and that was bad enough. It didn't stink yet, thankfully. 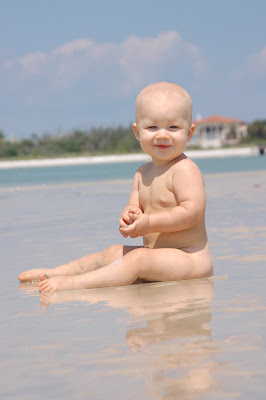 One more of my naked little kid, because it's cute and because my mother would be horrified to know one of her grandbabies is naked on the 'net and sometimes I just live to annoy her.

I hesitate to share pictures of my children because I don't want any of you being fooled by their cuteness and taking their side when I bitch about them, so be sure not to do that or you won't be seeing the kids anymore. Speaking of those damn kids, the Big Kid just woke the little one up from his nap after only 15 minutes (I'm pretty sure it was on purpose) and is poking me with a play sword while the little one bites and tries to suck on my toes. I guess I'm going to have to go deal with them.

Email ThisBlogThis!Share to TwitterShare to FacebookShare to Pinterest
Labels: A Beautiful Day in my Neighborhood and a dead sea turtle

The pictures are great! I am so jealous that you live in such a beautiful area. Lucky dog. I want a pic of my Little One sitting naked in that same spot! I will be there in a few short weeks.....

So, so cute! The little kid is adorable!

Little kid is heartbreakingly beautiful. Truly you live in paradise and must be the luckiest Mom alive to have such great kids.

Little kid is precious and I love your new beach find.
I know what you mean about Big Kid waking Little. Little J will purposefully go by Little N's room while he's napping and scream as loud as he can. Nice.

Those are some amazing pictures!
I love love LOVE the last one!

What fantastic pics, I love them and want to come live where you are now!

You're right... now I'm totally siding with Little Kid in all future matters. How could a face that cute be so evil???

I love the nekkid picts! But not in a perverted way, don't worry. Where do you live? I'm assuming FL?

yes, I also am curious to know where you live? It is absolutely gorgeous!

Do you have any more pics of the little kid? I'd like to see all you got! He is so cute!