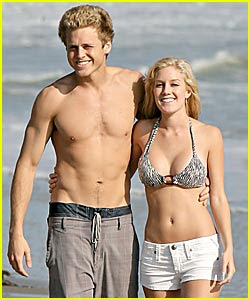 Spencer Pratt and Heidi Montag--SHOULD NOT BE FAMOUS. Come on people!! Reality television "stars" are not celebrities, and do not deserve to be taking up valuable page space on highly esteemed magazines such as In Touch and Us Magazine.
The Hills sucked (I watched it avidly, it really did suck). Spencer is a shit eating bastard and he looks like he is wearing dentures, and what is up with the bouffant hairdo? He reminds me of a politician, a Republican or something. He makes my skin crawl.
Heidi has proved her total stupidity and spinelessness by getting engaged to this loser after he publicly humiliated her on the show by talking shit about her and screwing around with Audrina (desperate little ho that she is). Who wants to bet how long they will be married before he's cheating?? He's one of those slimeballs that would be getting a b.j. in the bathroom at the reception from one of the bridesmaids.
I just wanted to clear up any confusion as to whether or not they are newsworthy celebrities--they are NOT, NOT, NOT and NEVER WILL BE.

Seriously, he looks like Ted Kennedy pre-Chappaquiddick? WTF? Blurbs about these losers are taking up copy space that could be devoted to Paris' religious conversion. Priorities people!!! How'm I supposed to find out about her plans for charity work if I'm stuck looking at your stupid mugs!?!?

I'm not even American, and I thought Kennedy as soon as I saw the dude.... with that hair, that is evidently the look that he is going for.
I don't even know what the hell the Hills are or who these people might be, so they are obviously NOT celebs. or I'd know who they are.

And, obviously he lacks the arm strength to pull his pants up.

A-freaking-men! I cannot stand these walking wastes of body matter!

I agree w/ burrus boys.. A kennedy wanna-be if there ever was one. I didn't watch this show but anyone w/ initials for a name really bugs me anyway. Besides, I heard this whole "engagement" wasn't even real, but just a huge publicity stunt and that they're going to cancel it right before the wedding.

How do you spell, DESPERATE, LC?

Totally agree. I never understood why Spencer was so cool. He's a total tool and his hair is God-awful!

The only peace that the whole Spencer/Heidi thing can give me is that it is doubtful he will ever be credible enough to run for public office. I say this knowing full well that someone is just waiting to throw Jessie Ventura and countless other dubious politicians in my face.

I agree with Monogram Momma. Initials as names have always driven me nuts. Give your child a name that you can call them by!