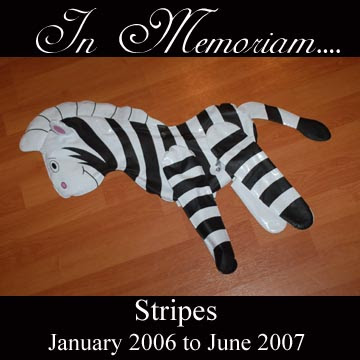 I'll never forget the first time I saw you. We were at the carnival, on our way out. The Big Kid was on the verge of another meltdown. We had irresponsibly let him hold the fish we had won and he was swinging it around carelessly and "hugging" it a little too tightly. 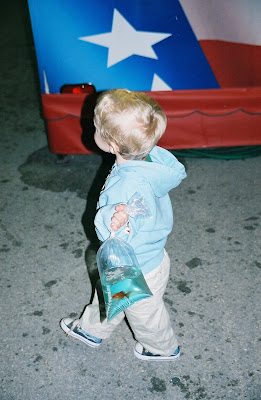 Having already played the "let's pretend to leave him and hide behind this funnel cake cart because he's laying on his stomach screaming in the middle of the fairway and we're sick of the two year old bullshit" game we decided it was time to intervene on the fish's behalf and attempt to lure him somewhere that could distract him and that was conveniently located near the exit. 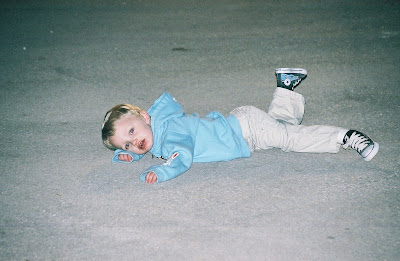 There you were. With all of your inflatable friends; the giraffe and the lion, the crayons, Hulk, Scooby and Spiderman, the guitar, etc. etc. The Big Kid saw you and his face lit up.

"Oh no", I thought, "not this overpriced plastic piece of crap." Ugh. You marginally matched his safari themed room but I hated you. And, he didn't deserve a damn thing. He deserved a spanking, is what he deserved, and although we probably would have gotten a standing ovation for doing it, there's always the chance of getting arrested and making headlines instead. I'm not into that kind of drama.
Anyway, I looked at Mr. Ashley who agreed that you were a piece of junk and the Bid Kid's feelings were no longer a consideration, so he scooped him up and carried him kicking and screaming away. Into the car we went. I don't remember exactly but I probably had to use the Atomic Elbow to buckle his crazy ass in. He sobbed for you all the way home, but I was satisfied that we wouldn't be seeing you again.
Then, lo and behold, the Big Kid goes to the fair with his grandparents and again you beckon to him. Sure enough, he walks back into our home with you AND your giraffe and lion friends. I cursed my luck and your hideousness, but he loved you and you stayed. Sometimes I did shove you in the closet and more than once I gave serious thought to the logistics of slitting your throat and hiding your body, but mostly I think you had it pretty good.
I can't say that I was sad to see your deflated body on the floor of the screen lanai. I knew it would happen eventually and I think you went quickly and had a pretty long life for the piece of shit that you are. At least you were always quiet. Vaya Con Dios, Stripes. 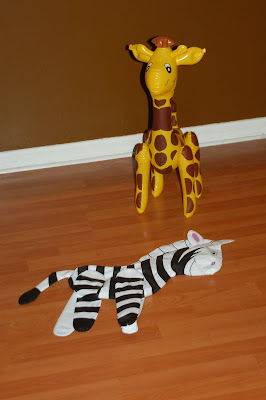 Email ThisBlogThis!Share to TwitterShare to FacebookShare to Pinterest
Labels: Stop smiling Giraffe, you could be next

hilarious as usual! J has a safari themed room also...but is so lacking the inflatables

Those things always manage to find themselves in the give away box HIDDEN in the garage.

That was too damned funny.

Are you sure the giraffe didn't kill him? He looks pretty guilty.

I'm very sorry for your loss.

We too had the unfortunate luck to have a hideous inflatable monstrosity in our home. I too contemplated "accidentally" deflating him. Luckily, he died as a result of too rough play. Damn! What a shame!

bbwwaahhhhaahhaaa
killing me, as always.....
and, missing you. still.

(check your mailbox on Thursday or Friday!)

I think that Mrs. P is on to something here.

ROTFLMBFAO..... That is too damn funny Ash.