Whenever the Big Kid gets caught in something red handed or is telling one of his impossible fibs, he makes this face: 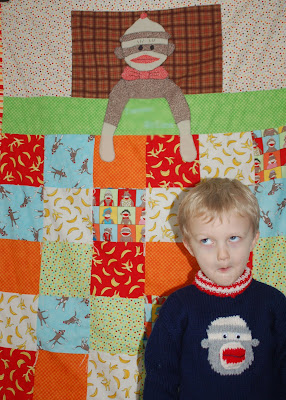 How am I supposed to discipline a face like that without laughing my ass off? Tell me, how?

I always "get down on his level and look into his eyes", like Supernanny or Nanny911 or Shalom in the Home or whoever, says to do. I am firm and serious and when I ask him what he's doing (always while it is really clear what he is doing and that what he is doing is wrong) he says, "Um....nuthin" and makes "the face". It's even more bizarre in person because he rolls his eyes back and forth and it becomes a sort of stare down that I lose 9 times out of 10 by laughing uncontrollably.

So at this point, many of my attempts to discipline him become a contest to see who will laugh first, because he knows that I'm going to laugh and his ridiculousness amuses him to no end. This has been going on for over 6 months now.

I just happened to catch it on film (or SD card, nowadays I guess) while we were taking photos for a M is for Monkeys page in an alphabet book my group of friends are going to do for our kids. That's the little kid's crib bedding, my friend made me the quilt and I love it. Mr. Ashley's aunt made the Big Kid the sweater. We have a fondness for sock monkeys and really monkeys of all kinds around here. Mr. Ashley says we will never, ever have a monkey for a pet and I think there is an excellent chance he is wrong.

Speaking of Mr. Ashley and lying, he has been telling the Big Kid that he can't watch movies in his room at bedtime (I know, we're bad parents, blahblahblah) because he didn't eat his vegetables and his muscles aren't big enough to make the dvd player start, when in reality the dvd player is dying a slow death and it is a total crapshoot as to whether or not it will work at any given time. The Big Kid totally accepts this with a little disappointment and an eagerness to eat a ton of vegetables the next day. I'm sure this is really wrong to do for some reason, but it is working out for the moment. 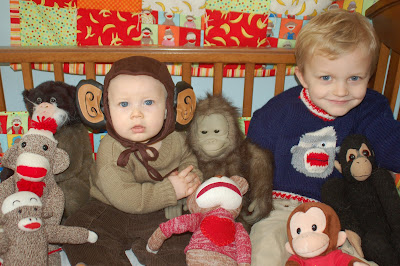 Email ThisBlogThis!Share to TwitterShare to FacebookShare to Pinterest
Labels: M is for Monkey Face

Again with the life sharing!!! I have had a SERIOUS monkey fetish since birth and perhaps in utero for all I know. My first purchase ever with my very own money was -- what else -- a big stuffed monkey. Her name was Judy. I loved her very much and when friend came over and marked in Judy's ears in INK(!!!) I beat said friend senseless. I guess monkey love can be taken too far (listen up Michael Jackson).

OMG!! You added me to the Me Likey column!!!! I feel so special and loved. Almost like I just bought something expensive. THANKS!!

My big one just saw your big one's face, and imitated it. Great. At least now, maybe he won't say "what's your problem?" every time he gets in trouble.

Morphs is a brand that does a lot of sock monkey clothing plus they recyle old superhero stuff into some really cool shirts and jeans.

I LOVE all the monkeys. We are a monkey family as well. Funny how having boys really cements that for us mom's of the Y Chromosones.

If I didn't have my own 10-month old who is occasionally loving to growl-scream lately in the most random fits, I'd totally tell you, you're right, you can't post pics of your LOs because they are sooooooo stinkin' precious and I'm takin' their side. Also, the monkey theme is so original and cute.

i'm in love with all the monkeys there! LOVE IT! Tell us how to make the sock monkeys--i'd love to know!

You buy them. From the store.

I have begged others to make them for me, but that's not going so well. I also bought a kit from Wal-mart for ages 7 and up, but it involves a sewing machine and I have one but can't even turn it on.

I have great ideas for sock monkeys though. It's on one of my lists of things to do.

You know you are SO BUSTED by me now that I know you have a sewing machine but don't know how to turn it on, don't you?

And I have an awesome monkey video from Lowry Park Zoo (in Tampa)about a year ago that is HYSTERICAL that I will try to post on youtube and send you the link. If you guys like monkey's that zoo has the most ACTIVE and LOUD monkey's i've ever seen. They are so fun to watch there!

The last picture is just adorable!! How cute your kids are...and all the monkeys...how fun!
I just love your blog. I came here via Monogram Momma and I just laugh the whole time!!

It's taken me a half hour but here is your monkey video I uploaded for you...

P.S. There were actually 2 video clips I shot. One where I panned to the mini's saying "isn't this fun?! What are we watching?!" and mii #2 screams as loud as he can at me to get out of his face. I will spare you that version.

I just have to say that face just may be the second cutest face I have ever seen.. (any face by kid#2 makes is #1, My kid#1 is 11 so none of her faces are ranked as cute anymore)
And I cannot believe you busted out the pictures... you've come a long way, baby.

I love the photos, but isn't it child abuse to have your children in sweaters in the middle of summer in Florida?