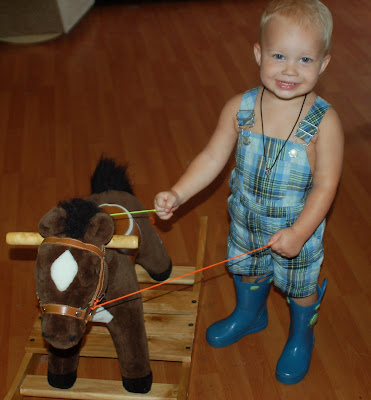 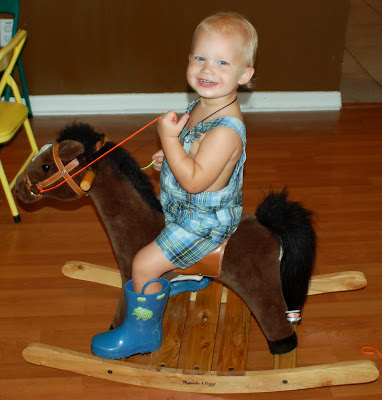 Since getting to ride on Mother's Day, little kid is OBSESSED with horses. For a week now, he's been trying to hook his rocking horse up with some reins. Yesterday after watching him struggle with a bag of sunglass holders he had found somewhere, I stepped in and helped him out.

He is thrilled to finally have reins, and drags that poor rocking horse all around the house, even trying to stuff it into Murphy's cage.

Notice how he's in last Easter's overalls? I find that overalls and a backwards diaper are effective for preventing nudity. So far.

The boots are his own personal touch. The kid is a shoe freak.

Personally, I think him and Shiloh should hook up. I'm kind of over Angelina, but I'd put up with her for grandchildren that cute.

One more of him and his favorite victim: 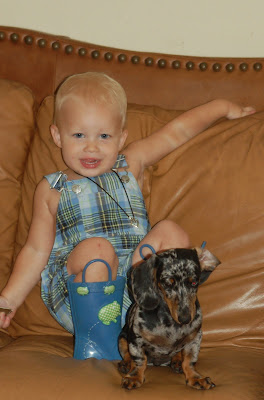 Email ThisBlogThis!Share to TwitterShare to FacebookShare to Pinterest
Labels: Handsome as the devil

He does look super cute but we all know better!

I love the wellies with the overalls - at least he matched the colors, right????

What's it with boys and their shoes? My 21 month old little dude LOVES his shoes! He cries when you take them off. His second word was "shoe" (the first was lights). He's worse than me!

You can tell this one's got a glint in his eye just to look at him, and the boots are KILLING me. Evil never looked so good!

Who cares if he's naughty. He is too damn cute!

He's absolutely adorable--as always! Does need some more of those overalls and can he wear size 24 months? I have some that my son can no longer fit into that are super cute like that. I could mail them to you..I can even mail them to your neighbor/friend if you don't want to give your address out. Reply in the comments sections if you want some and I'll figure out a way to get you my email address. I'm thinking that would also be a good way to buy your love. LOL!

So, overalls and a backward diaper work, huh? I'll have to give that a try. Katie keeps reaching down her pants (or pulling up her dress) to undo her diaper. I was about to just resort to duck tape.

He is so cute-he looks so proud of himself!