This is little kid 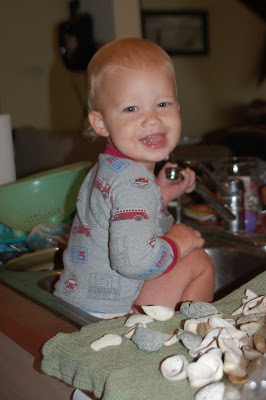 Please note that he is sitting in my kitchen sink.

(Don't look at my dirty dishes, and the shells are from the beach trip yesterday. Yep, I went again. That makes 3 days in a row)

He started his day with some naked finger painting with poop time before anyone realized he was up.

He immediately fed his rocking horse some juice.

And then while I was getting Big Kid ready for school, IN THE SAME ROOM (our kitchen and family room are open, its called a great room but I was afraid to call it that because maybe it's a regional thing and some of you would think I was bragging about how great the room is. It is a pretty great room though), little kid pulled a chair over to the sink and somehow climbed completely in without knocking anything over or making a sound. I just looked over and saw him sitting in the kitchen sink, grinning from ear to ear.

Unfortunately, taking pictures does nothing to stop his horrid behavior, that's why you haven't been seeing them as often, but I had to take a pic this time.

Then we had several incidents of pulling the dipe off, so I finally just told him he could be naked but he wasn't going to be peeing all over my stuff, so to hop on the potty and go pee...AND HE DID!

Luckily, Big Kid was in the room with us and went berserk with pride, which just made little kid glow with happiness. We did high fives and lots of screaming and an Ashley family pile up (we put our hands on top of one another and yell "Team Ashley! (but we use our last name) like they do in baseball) and made a big deal of flushing.

This was wonderful. I see a diaperless future for myself. However, after having this big celebration and getting a Dum-Dum lolly at 9:00am, he felt the need to try again every 2 seconds. There was some fighting over flushing, and toilet paper, and exploring the medicine cabinet.

And then he pooped on my bathroom floor.

It's just not the same as picking up puppy poop. I was seriously dry heaving, I kind of never want to go in that bathroom again, even though I thoroughly cleaned the area.

I have a feeling I'll be spending lots of time there though.

I hear him in there now, and I know he's awake, and very possibly peeing on things as I type, but I'm just not ready.

Edited to add: I forgot to share his window mistreatments with you. This is another one of his hobbies. This is the second set of blinds he's been through: 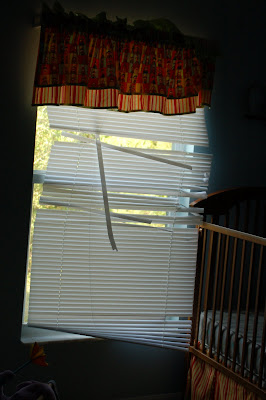 See how there's no crib sheet on the mattress? That's because he pooped on it.
Posted by Unknown

Email ThisBlogThis!Share to TwitterShare to FacebookShare to Pinterest
Labels: the least he could do is potty train

Wow, he IS a terror. LOL I'm sorry... there's nothing like an up-front-ruin-your-day moment like cleaning up poop in the morning.

Do you have any great ideas for killing time in the bathroom during potty training? We're just starting... and it's hard to sit in there for so LONG. I'm bored after a few minutes. I will probably bring a book next time.

Good luck on the PT

Sorry to hear that you are up to your ears in POOP today! Hopefully Murphy behaves!

OMG those blinds! Ashley, I don't know how you do it!

You got some kind of mountain wildcat in your house?? How the hell did he do that to the blinds? lol
K

Are those sock monkeys on the valance? I LOVE SOCK MONKEYS!!!!

Did you have to go visual on me? Brings back some exhausted feelings! lol.

LMAO!! Sorry, the "And then he pooped on my bathroom floor." seriously got me. Toddler poop is sooooo nasty.

And least you got to it before Murphy did! ;)

hmm, i think he's been trying to tell you something about the plastic disposable diapers - see, he's been wanting you to go green. switch him to cloth!

He is super cute! But perhaps I wouldn't think that if I was the one having to pick up his poop.

Way to go, lk! Wow - pee pee in the potty - that is great! I hope it happens again and again and again. You know, I've heard that a great way to potty train is to let the kids run around naked - you could really be on to something here. :) (But the poop on the floor is a big problem, imo.)

I'm not laughing AT you, I'm laughing WITH you. Now laugh, dammit.

Oh. My. Fucking. God. I keep trying to type this comment and yet keep returning to the picture of the blinds. E-bull knows no bounds!

OH MY GOODNESS! I have a little Diva in Okla. that sounds like his match. I am too embarassed to tell you some of the things she has done with poop. He is absolutly adorable... have you found its harder to punish or get on to him, like it was with your oldest... sometimes we just laugh when should be sending to toddler jail!

Just be thankful that it's not in the bathtub..... yet.

Well, he IS kind of cute, that's a plus right? Somehow I don't think "The Nester" would approve of his window mistreatment but the valence portion is adorable.

I've been thinking about LK and he seems awful smart, even if it is in an evil genius kind of way (or should I say e-bull?) maybe he'll turn out to be president some day. (A good one though, not like the one we have now. )

Oh lord, I'd completely forgotten about the toddler "Poop Portraits". Now I have a baby. He's going to be a toddler. This is not good.

You should be offered stock in a window-dressing company when you have children. We've gone through so many blinds...

Holy hell. That's all I got.

Hugs. And Beer. That's my answer. (both for you, not for e-bull)

OMG!! As always, he's adorable, yet extremely destructive. We used to call my toddler a terrorist b/c she would leave a path of destruction wherever she went. Don't buy any more blinds until he's 4. He can live with the imperfections and it will save you some $$. BTW, I have blinds that look like that in my daughter's room, too. She's not getting new ones until we're well past this phase!!

That photo is priceless!! He reminds me so much of the little guy I babysit for (who peed AND pooped on me in the same day-though in his defense he was sick).

Maybe time to try an alternate form of window treatment?

Your stories are starting to scare the shit out of me. My son is 18 months.

While I know the same is not true for you...those blinds made my day..