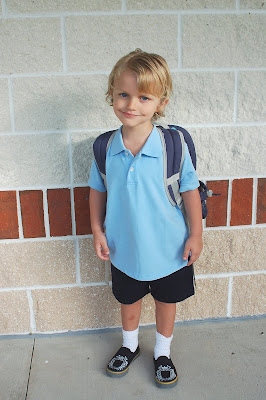 I swore I wouldn't do it, but I started to get all choked up as that kindergarten classroom door closed.

Not so much because he's growing up, but because it was one of those "Damn, I really am a grown up" sort of moments.

I have two kids, a house, an SUV, I'm waiting in the car rider line...

How the heck did it happen? When??

I picked him up after school and he shouted out as soon as he saw me, "I had a great day at school today!" He was so genuinely happy.

We hopped in the car and I began the obligatory quiz:

Ashley: Did you make friends?
Big Kid: Lots of fwiends. I have so many fwiends.
Ashley: How nice! Who was your favorite friend today?
Big Kid: Hmmmm. I fink Hudson. He wasn't here today, but dat's who I pick.
Ashley: He wasn't there today? ...
Big Kid: No. Not yet. My second favowite is Justin, 'cuz dat rhymes wif Hudson.

So his best friend at school today was the one absent kid?? Am I right to be concerned? Because that's weird. We know he's weird, but come on now.

little kid is gearing up for a major Separation Anxiety phase. We didn't do that with Big Kid because he was easy. Not little kid.

As soon as he realized I was headed for the door after dropping him off at daycare, he stepped between me and it, held his arms out wide, and said, "Mum, Doh go mum. No doh go mum. Muuuum." Then he started crying. I finally just had to make a break for it and pull away while watching him cry in the window.

He was having a grand old time when I picked him up though and she said he did great. But tonight when I had to leave the house to run an errand he pulled the "Doh go, mum" business again and followed me around crying. It kind of breaks my heart.

But I guess all in all, today went really well. I got stuff done, Big Kid liked school, little kid had fun at day care, and I realized I was a real, live grown up...well that last part sucked, but still.
Posted by Unknown

Email ThisBlogThis!Share to TwitterShare to FacebookShare to Pinterest
Labels: it all happens too fast

Congratulations on becoming a grown up! I never had that thought when my two older girls started kindergarten. With Sarah it was, "My BABY is going to kindergarten? When did she grow up?" With Emily, they were both in school, and I had to walk out of the school for the first time without a little hand to hold. I had no idea what to do with myself.

That was so funny!!! His 1st fwiend--the absent kid who he has never met?? Kids!! Gotta love them.

My 3yr old was great and didn't have too much of the separation anxiety. I know without a doubt my youngest will get hit by it hard and I am dreading that day. Glad everything worked out with everyone!

Being a grown up does suck. But sometimes it's pretty cool....

Glad he had such a good first day.

My girls BOTH do the sad, "don't leave us" thing.

I'm convinced that I'm gonna die one night after leaving them crying at the window and for the rest of their lives all they're going to remember is that they begged their Mom not to go and that was the last time they saw her.

But then. That's just me being weird and morbid.

I wish I could practice what I preach...little kid will do great, just stay consistent.

And I don't think it's weird for BK to like the absent kid the best...maybe his class is filled with a bunch of losers.

Be prepared for lk to never leave your side. Chay did that when he first started at "school." After picking him up, he was like cling wrap. I couldn't get him off of me. But, it gets better!

Oh I totally understand about the being grown up thing. Mine just started 1st grade and it hits me I have a kid in grade school WTH happened? when did I get old?

I am sure he will do well in kindergarten I was SOOO nervous my son would be the weird kid and never make friends but he suprised me and had tons! I was also so worried about the stupid things like him eating his lunch instead of talking, or getting lost in the school.

Just wait til your BK is a senior in HS.....sorry needed a quick break to get a tissue...

All my kids did/do the whole don't go thing when I leave them at daycare. I finally sat Shaggy down the other day and said, "Look, you are 17, don't you think its a little ridiculous to stand at the window crying everytime I leave??" I kid, I kid! Abby still does that whole don't go thing whenever we take her to daycare. I know she's find and forgots it as soon as I leave but it is totally heartbreaking!

Too funny! BK's best friend is the boy he hasn't met yet! What a hoot!

I went through the very tearful, heartbreaking departure from daycare with my daughter. Oh what pain. I'd leave everyday crying. Until.....one day I left (her crying as usual), but this time, I went to a window and peaked in to see how she was doing. She was having fun! The minute I left, she stopped crying and was engaged with the other kids. The teachers told me that's how it would be, but I didn't believe them. I figured she spent the whole day crying over me!

Hopefully that's how it is for LK, too.

Victory for all. I say beer is in order!