This is so hard on my family, we've had him for 18 years. My poor mom feels not only the shock and sadness of this happening so suddenly, but guilt over not having the $6000-$8000 cash on hand so he could have surgery. I know that we all know that most people wouldn't have it, and most people couldn't do it, but guilt always finds a way to rear it's ugly head during times of sadness.

My family is horse-less for the first time in a long time. Since I was 7 or 8 maybe? We most likely won't have another horse, and will certainly never have another horse as wonderful to look at and easy to ride as Apache. I don't think anyone has ever fallen off or been thrown from Apache. He had no personality quirks that made anyone crazy. He was sweet to the other horses and great with kids, standing as still as stone as little kid brushed his legs and kissed his shoulders.

We sold him once and he moved to another state, only to have us track him down and get him back later. He's been a member of our family for a long time.

My grieving for Heidi Louise (who I still mourn every single day, all these months later) has convinced me that we will one day meet our pets again. That if I believe in Something after death, and Someone looking out for us and arranging all of those wonderful "coincidences" to remind us of that, and if I know without doubt that animals have as much of a soul as we do (if not more) and that we feel this emotional connection with them, that we will surely meet again. That before I get to the pearly gates, I'll cross the rainbow bridge and be reunited with the unconditional love of the animals who have blessed my life.

But man, is it hard to miss them. It's hard to come to the end of a chapter in your book of life. 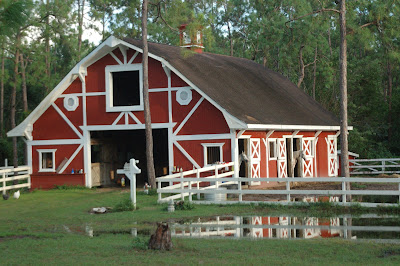 Unfortunately, I don't have a photo of him on this computer but here is his home, my parents' barn. The other horses (that belong to friends) will grieve him, having spent almost their whole lives alongside of him. It's just sad. The whole thing is really sad.
Posted by Unknown

Email ThisBlogThis!Share to TwitterShare to FacebookShare to Pinterest
Labels: DAMN IT

Awww, Ashely. I'm so sorry to hear of Apache's passing. So sad. Big ((hugs)) to you and the family.

I'm so sorry to hear about Apache.

My heart goes out to you and your family.

I am so sorry to hear about your mom's horse. It is so darn sad. Big hugs coming your way!

I see that he had a great home. I'm not sure how long horses usually live, but 18 years seems like a really long and happy life. He was loved and will be missed. I have a feeling that where he is, there is a smile on his face and he has the peace of knowing that he couldn't have asked for a better life here.

Keep holding on to that thought that we will see them again. It just has to be true. I've actually invested alot of hope in that one as well.

Where he is, he wants you to know that it is ok. It's all good.

I'm so sorry for your family's loss. I lost one of my pets a few years ago under similar circumstances where I could have had an "experimental" surgery done for thousands of dollars at a university 4 hours away. At the time, I had to weigh whether I could put myself in that much debt and the quality of life she would have if the surgery happened to work. I felt guilty for months because we didn't go through with the surgery, but now I know we did the right thing. I'll keep your family in my thoughts and prayers.

So sad. It is so hard to lose an animal that is your family. Sending my condolences.

I'm so sorry Ashley. My dream is to have a horse - I love to ride and have always wanted one. (I WILL have one someday.) The barn is gorgeous. It sounds like he had a really good life with your family.

I am so sorry Ashley.

Apache was lucky to have such a loving family and you were lucky to have had Apache in your life to love. RIP Apache and my thoughts and prayers are with you and your family!

Ashley, I am so sorry. Just so sorry.

I'm so sorry about Apache, and I'm sorry for the sadness his loss brings to your family. I believe, like you do, and you'll be riding him again.

That life and death decisions have to be made based on our ability to pay for treatments just sucks. I've had to make decisions like that, too.

I'm so sorry for your loss, Ashley. Please give your mom an extra hug from me, too.

HUGS to you and your family. I'm so sorry Ashley.

I'm so sorry for the loss of your Mom's horse. It's so hard to lose a pet. Please know that those of us who love our animals completely empathize with you and your family.

I bought Apache when he was 4 years old, I had never seen him in person prior to buying him, I fell in love with him from his photo in a paper. It was an ad for a big Arabian trainer in Ocala, Fl. I had to have him so I bought him sight unseen (not really a smart move but this horse was perfect, never had a bad habit) . Ashley was the rider, she was showing in A-rated shows from the age of 7. She traveled all over with a trainer constantly telling her what to do. She was a trooper. She made a mother proud. Ashley grew up and got different interests as kids do, but those horses would never be sold. They deserved a life long home and a good retirement for taking care of her as well as they did. I owed them a debt of gratitude. The others pretty much died from old age or long term health problems, but it wasn't time for Apache, he was too healthy, still in good shape-ready for the grandsons. Ashley doesn't remember the exact details about my getting Apache back. It was a miracle in my book. Money was tight and I needed to sell a horse to make ends meet. I had never sold one before, we just weren't that way. An older gentleman came to my barn and had his pick of the horses and he picked Apache. I was just sick about parting with him. Mr. Ed Craze lived in Georgia on a beautiful farm and Apache was his baby. So much so that 5 years later when he discovered he was dying of cancer, he called me out of the blue and asked me if he could "give" him back to me. He just wanted Apache to be happy and he knew he would be with me. The horse van pulled up late one night and as they opened the back doors, Apache backed out and looked more beautiful than I could ever remember. He pranced up the long driveway and down to the barn, happy to see all of his old friends were there. So, here he stayed. Every winter (when he came to town), I would unexpectedly find Mr. Craze in the barn visiting with Apache. Year in and year out he showed up..and then he didn't. I can only assume that he is gone and has now probably met up with Apache at Rainbow Bridge. Waiting with him will be his old friends, Dancer, Pou, Tshadow and Tsultry. They will run the 100 acres of green grass that I am sure is there and wait for me. Goodby my beautiful Apache Print.

I knew the story of getting him back was cooler than I was remembering. He was such a good boy, it's so sad that it all had to happen so suddenly and unexpectedly. Your comment got me all choked up again, mom.

I am so sorry Ashley! Your mom and your family (and Apache's horse friends)will be in my thoughts. Apache sounds like an amazing horse. He will not be forgotten!

I am so sorry, Ashley. Hugs to your and your family.