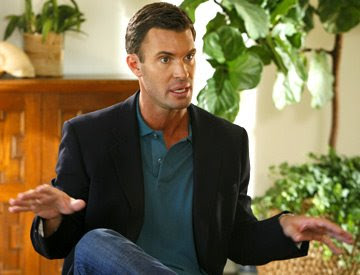 Are you all watching "Flipping Out" on Bravo?

A friend recommended this show to me a while ago and man am I regretting not making a point to catch it sooner.

I ADORE THIS SHOW. I didn't want to either. I'm pretty sick of everything real estate related, most reality television, and any mention of "flipping" anything makes me want to puke.

However, Jeff is so quirky, so OCDish, so demanding, bizarre and boundary-less, that I am in love.

I love the closeness of his staff (he has an oil portrait of his maid) and his obvious love for them, but total inability to express that in any way. The whole cast is very attractive too; he is gorgeous in a flaming gay, old Hollywood sort of way.

So if you aren't watching this, please do. I seriously Laugh Out Loud every single episode I catch. I can't get enough.

You know what I have had enough of? Jo from Real Housewives of Orange County. Slade too, especially now that he's the old pompous jackass playing young guy. Dude, you were hot in your little mortgage broker get up. When you were well-dressed, articulate, a good father, and tired of Jo's immature bullshit. You are just lame in your tight little henley shirts and sideways hats and that lost puppy look of longing for average Jo.

I was so happy when they broke up. He's clearly too good for her, in every way, and she clearly has a problem with growing up to be a responsible adult...not that ditching your half assed career to attempt to be a reality show starlet/rock star is irresponsible...a not very talented, not amazingly gorgeous, kind of old to be starting out in the industry rock star at that. 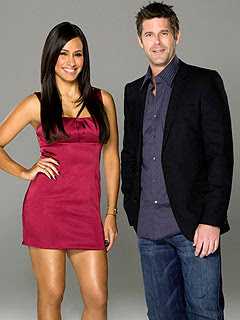 Speaking of nauseating and Bravo, keep your eyes out for Million Dollar Listing. It is Douche-bag-tastic to the nth degree. I didn't know whether to laugh, roll my eyes, or dry heave.

It's about these three young, "hot", real estate agents in Beverly Hills.

I'm sorry but if you trust someone with hair like this: 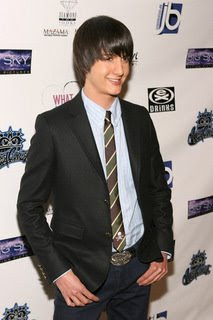 I began watching with a plan to despise the 21 year old, just because it's enjoyable to hate young, successful people, but he's good looking, charismatic and drives a hard bargain, so it was Mr. Emo Hair that drew my ire instead.

I'm going to try not to catch this show again though. The success of these lame asses is a true testament to the ridiculousness that is Beverly Hills and frankly, watching a bunch of uppity tards get filthy rich isn't my idea of enjoyment.

So...we've covered quite a bit of Bravo's television line up. Can you tell that I can't find the remote control for the bedroom tv?
Posted by Unknown

Ashley,
I see that you are a reality tv junky too! I haven't watched Flipping Out for the same reasons that you weren't watching it. Since it has your stamp of approval I will watch it.

Jo has always gotten on my nerves and can't imagine watching a show where Slade is trying to help hook her up.

I agree with you about that guys hair - what is he thinking?

I think he's trying to go for the Katie Holmes look. Don't get me wrong, I love her look...On her! On him NOTSOMUCH!

I watched 3 hours of Flipping Out last night. I haven't seen one of these shows since last season. I kinda liked it, kinda was annoyed but nothing else was on. Last night I was thoroughly entertained though. Funny. Sad. Interesting.

I also love the competition shows on Bravo. Top Chef, Project Runway, Shear Genius. I've always loved how when one ends, the next one begins. Except this summer when they decided to start Project Runway at 9 and have Shear Genius at 10. I didn't realize (b/c I wasn't that into SG this season) and missed the first episode of PR. I liked the 10 o'clock line up. It's very hard to break my routine.

Totally love Flipping Out! I think Jeff's best quality is his ability to laugh at himself. The show does look like it gets very interesting coming up soon. I couldn't believe when he was going through Stacey's apartment (in his new rental property). Totally qualifies the fact that Jenny doesn't want him to know where she lives!

I watched the preview of the new real estate show and haven't made up my mind about it yet. I do like the other two guys. Emu-hair is the perfect description!

I watched Flipping Out once and couldn't get into it.

I was folding laundry yesterday when that Jo and Slade show came on. What a train wreck. I wanted to bitch slap them both.

I miss Flipping Out so much! We got rid of cable this year, so havent seen any of the new season of the show. But I LOVED it last year. Jeff is totally insane. It's fabulous.

I'm hooked on Flipping out too...DH stayed up to late watching last night..we saw a clip of the Million...show, and all I can say is they all look like they are 12...geez...

Well, I think I love you, I am blushing. Not in the creepy way though..Well I had to say it.
I feel the same way about Jo and Slade. My hatred for her runs deep. It went from normal hate to white hot when he took her on the hot air balloon. She was such a bitch!!

I watched my first episode of Flipping Out this weekend and didn't know whether to cry or keep watching. Working with someone like Jeff would drive me crazy!

Jo and Slade...aren't there 15 minutes up? I remember seeing previews for this and hoping it would crash and burn. Besides it being obvious that they are FWB (friends with benefits) they both are untalented and past their prime. NEXT!

I can't watch something with fabulously wealthy 20-somethings. I think I would gag from it all. It's like Hubby gags when he happens to flip to MTV and they are doing a Sweet Sixteen and the gift is a 150,000$ car.

Okay... so now I'm watching the Flipping Out MARATHON on Bravo right now. I'm sure I'll be addicted within the hour. Thanks.

I haven't had a chance to catch the Jo and Slade mess yet. I did watch when Bravo started running all the Jo and Slade drama episodes of Housewives a couple of weeks ago to promote it, though. I love Housewives but Jo makes me want to reach through the TV and smack the stupid off of her. Pouting to get your way stops being cute at the age of FOUR. Unfortunately I guess it still works with men.

Nevertheless - I'm sure I'll catch at least one of these episodes. The whole premise of the show is ridiculous.

I love Flipping Out!! I was sad when it ended.....then they brought it back for another season!!
I was shocked about Jenny and Chris. :( What an ass he was, though.
Lesly

Ashley did you get your Satellite turned back on???

No satellite, but I have basic cable that I don't pay for because they set something up wrong when installing my internet line, making it free.

So I do get 30 channels, which is more than enough really.

I am with you on Jo. I watched RH of course and always wanted to pinch her. Hard. On the fleshy part of the arm, if she had some of that.

I have yet to watch their new show but it's saved in my DVR somewhere. I hope I can stomach it.

you know there is a new RH coming from Atlanta, yes? I think this month or next.

I watch all these shows to. I was thinking the same thing about the guy's hair!!! Yuck!!

I am a HUGE Flipping Out fan. Jeff's OCD makes me look almost normal. My husband can't stand to watch it though, so he always leaves me alone to watch it.
I watched it all last season and was hooked, but somehow I missed the second season premiere, but I got lucky enough to record the marathon they had running before last night's regularly scheduled show. All I need now is the time to sit down and catch up.

Is Million Dollar Listing back on? When I last watched it, it was about an older RE agent and his wife who did nothing to help him, although they were supposed to be a team- Ray and Dia. I don't remember any young ones.... Oh, and swarmy Scotty Brown.

DH and I just discovered Flipping Out...We love it. Jeff is a lunatic but so fun to watch! Missed last nights episode...hope to catch a re-run soon!

I have been hooked on this show since the 1st episode. I lurve Flipping out! Its the best show and Jeff Lewis is hardcore!! Just wish I could find me a Zoila!!! I need her!!!

I really love all the shows on Bravo's line up, but my two favorites are Top Chef and Kathy Griffin: My Life on the D List. Totally my kind of humor-- sarcastic smart ass. Love it!

Sometimes I love Flipping Out and sometimes I hate that guy. Jo gives young women a bad name in a totally different way that Brittney Spears and Lindsay Lohan. That girl is unbearable and Slade is now unbearable because of her! I hope that show ends quickly.

I'm a total reality junkie and Bravo has some to watch and some to miss.

Watching Bravo as we 'speak'. Shear Genius. I love Bravo, but sometimes wonder what they are thinking with some of the shows....Jo and Slade for instance! :)

Hubs and I LOVE watching Flipping Out together! Strangely enough, he's the one who got me hooked on it.