This particular baby was not so fond of little kid. Apparently at her house, people don't insist on being 2 inches from your face, staring at you with the occasional excited pterodactyl shriek thrown in just for fun. 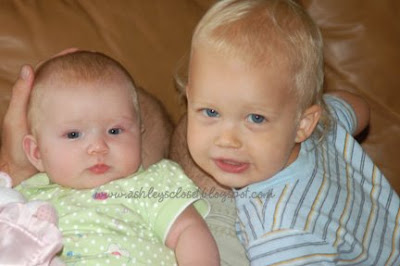 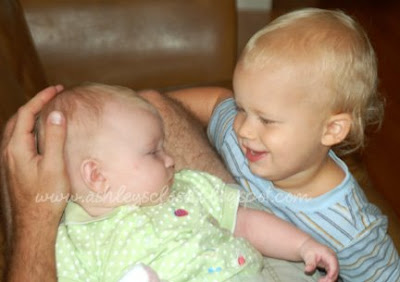 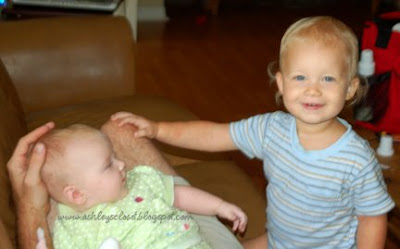 * little kid's hair really is weird. Once I downloaded these photos, I told Mr. Ashley and Big Kid that I'm cutting it. They both started protesting but I'm not letting him rock the white trash clown mullet any longer. I'm the mom, I did all the work, I make the hair decisions. Period.

And why the hell isn't his hair growing on top?? The kid is almost two and we really only brush his hair to humor him.

* Some babies want me to stand up while I hold them. Period. No sitting down on the job. little kid used to pull that trick.

* Babies are a lot of work. Luckily, babies also really like Mr. Ashley, and he did most of the work. Still, it totally interfered with blogging time. Plus, the chaos level was like +100.

* As I was changing a diaper, Big Kid looked over and said, "DAT is one weird penis." I told him that she was a girl, so she doesn't have a penis. "Oh yeah, I forgot. What is dat dat she has?" Um, it's a vagina. Girls have vaginas. "Hmm, bagina. Dat is a funny word. " Yes, it is. Don't ever say it around anyone, ever. I mean it. That's private talk, for real.

* little kid can quickly analyze a situation and knows when to take advantage. He was strapped into the time out seat THREE times while the baby was here.

* It was kind of mean of me to pretend that the baby was the treat I had promised the boys before I left the house this morning, and to tell Big Kid that I got her for him. The shock and uncertainty on his face wasn't funny. Well, it was funny. But only for a minute.

* Big Kid also likes babies. Not enough to give up the computer or anything, but enough to read her "Brown Bear, Brown Bear" twice and to ask if we had to give her back.

* These kind of babies will hopefully be cute too, and you can make them live outside and/or give them away for free on Craigslist: 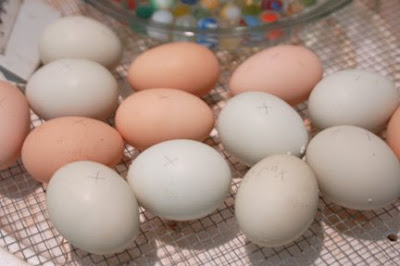 And for those who were wondering, I did not find the baby at Goodwill. Don't even get me started about Goodwill. Mr. Ashley called after my photo shoot to tell me a friend was in the midst of a major family emergency, and I offered to go get the baby while they figured things out.

So it has been a busy day. I'm so tired that you don't even get to hear the Goodwill story or about the photo shoot.
Posted by Unknown

Hahaha, you seriously crack me up - thanks for making me LOL on a shitty day!

Seriously, when is Little Kid ever going to be able to rock a mullet like that again. Let him have it, its baby fine, beautiful and blonde. Def Leppard is probably calling and wanting it back. My soon to be 3 year old son had one till he was over 2, and even then I had to have the babysitter get it cut, cause I couldn't part with that awesome baby curl/mullet thingy on the back of his head. Kiss it and run your fingers through it for me, you'll miss it when its gone :)

I don't know... I kinda like the white trash clown mullet. I think you should keep it!

Oh wow little kid is TOO cute. It's really hard to believe he is so evil. Also, I hope its not rude to assume that most of your readers are moms, but I just want you to know that I'm a 22 year old, no kids yet and don't want to have them for a long time, but I love your blog and check it multiple times a day! Your writing is hilarious!

Those photos are too cute :)

My daughter has a baby mullet. sort of thick and curly in the back, not so much on top. But she rocks it well and is cute as heck. I see little kid is the same(cute as heck). I heart toddlers with baby mullets.

I love it. That little girl is adorable and the look on LK's face is even more precious. OMG, they are too cute! Go Mr. Ashley. It's awesome to watch dads be great with babies!! I can't wait to hear the Good Will/photo shoot stories. I hope it wasn't a photo shoot at Good Will. LMAO! Did Mr. Ashley find a new job? How is he managing? When do we get to see a picture of him.

BTW after seeing your pic, I definitely think you deserve the Mamalicious name. I guess if you "Marry" her, you could take her name. LOL!

Wow I think that is the most we have ever seen of Mr. Ashley (since we all know how fond he is of being pictured on the blog!)

That baby is seriously cute she would fit right in with the cuteness of BK & lk.

I had to get my BK's hair cut when he was 6mths old and it seriously needed to be cut. It was so long it was in his eye.

'One weird penis' and 'white trash clown mullet' made me LOL!!!

that is one stinkin' cute little girl. i seriously need one of my own. i would try for it now if we weren't so darn broke.

I think you should keep her.


and charlie just had his mullet-ectomy a few weeks ago. looks SOOO much better. i let melody's go without cutting it, but she's a girl.

Dowlan, I told Gretchen to "run like hell", I believe were my exact words, throughout that whole adoption process of yours. I know she's cute and you love her, but still. Two four year old girls in one house was a nutty idea.

little kid fools everyone with that non-evil look of his, no one believes me. I love to hear that younger people read the closet, I know we have some college and recent graduate readers. I've gotten a couple drunken fan letters (love it!).

The mullet is just too white trash. Big Kid rocked the long hair until he was two and half. But he did have ringlets. I will let little kid keep some of the smaller, just growing curls at the back of his head, but the long flying nun bozo wings have gotsta go.

When little kid HAS hair, he can grow it long. Right now it's just too silly looking.

I agree, that baby girl is darling. That age is so snuggly. Big Kid was amazed by her fat cheeks, he mentioned it over and over again.

The pics of little kid are SO cute. You should clearly have a baby for him. And his hair is cute too! I'm with Mr. Ashley and Big Kid on that I think.