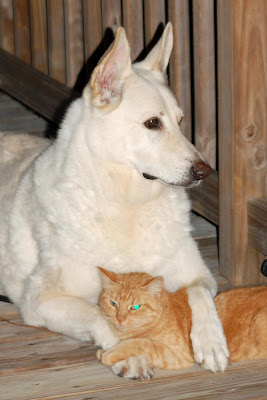 Tonight these two sat like this while I ran inside, got my camera, put my battery in it, went outside and tried to take a photo, figured out I had no memory card, made Mr. Ashley run around and find me one, and finally got it in and got this ONE PICTURE. Then they moved, but at least I got one.

They are truly friends too, Lily is not holding her down. This is especially odd because Tangerine is pretty much a total freaking bitch. She always has been. Very cute and always small, but constantly a pain in the ass. She's like a bad roommate; she demands a lot while giving very little.

Tangerine's "rider" would include:

-Fresh Step cat litter...NO clumping, NO crystals, NO multi-cat, NO odor control, NO brand that is on sale. Or she'll piss on your clothes.

-A normal, uncovered litter box. NO porta potties, NO self-cleaning bullshit. Or she'll piss on your clothes.

-A clean box. She'll let you know when things are getting out of hand by pissing on your clothes.

-Clean, fresh, unshared water. Preferably from a running source, NOT the tap. No well water for Tangerine. Only from the reverse osmosis spigot. She will accept it in a cup (only because we decided we were willing to let her die of thirst if she did not). The cup must remain full throughout the day though.

In exchange, she'll grace you with her presence two or three times daily, so that you can provide her with food, water, and a comfortable place to go potty. She'd really rather you don't touch her, unless she initiates the contact, which happens maybe twice annually. She will let the kids touch her from time to time and will tolerate Murphy dragging her across the porch by her ears and being aggressively pawed and mouthed by Lil.

Isn't she charming? That's what happens when you pick the cutest cat, people. Oh, she's so cute, she's so teensy, like a little Tangerine...until she's pissing on your stuff and demanding running water. Little shit. She loves that dog though.

Our other cat Pearl, who was too big, plain black, and boring as a kitten, is the greatest cat ever. She deserves a post of her own, another day.

Just wanted to share this odd couple with you. Silly Lily, our gentle giant, and Tangerine, the bad roommate.
Posted by Unknown

Email ThisBlogThis!Share to TwitterShare to FacebookShare to Pinterest
Labels: Don't choose a book by it's cover

Super cute pic of those two! I especially love how both of them have one of their paws on each other..awww

What a great pic! You need to enter that in a pet photo contest.

Aren't cats the worst? I don't know why we even want them as pets as independent and demanding as they are! I did a post a month or so ago on our pets including 7 outdoor cats! Check it out if you're bored. :)
http://johndeeremom.blogspot.com/2008/04/menagerie.html

Haha! Sounds a lot like my cat - I picked her out because she was cute but she is such a nightmare. A lot of the same issues as you have - only likes a certain kind of litter, can only have the box is a certain place, it has to be so clean - etc...arg! Cats are a pain in the ass - why can't they be more like dogs in that department?

My cat is the same way - almost to a T of what you described...arg!

How did you get them to be friends? Ever since we got the dog, Hubby has taken great joy in finding a cat, throwing it at him, and watching the chaos. So now they hate each other. And make me miserable with their constant hissing, spitting, and barking.

We picked out the cutest kitten ever at our local animal shelter a few years ago. She was a super-sweet kitty, too, but she turned out to be mentally ill. She started out eating strings, and then progressed to eating any and all fabric that she came in contact with, with the exception of denim. She was literally costing us hundreds of dollars in ruined clothing, so we eventually had to give her up when none of the "cures" the vet gave up worked for her.
The next cat we adopted wasn't very cute and was very unfriendly. Now she's the sweetest, most beautiful cat in the world, and we love her to pieces.

Oh, I have an orange spite-pisser here, too. She blames Fidel for all of her woes and just pisses on his clothes.

Those two are sweet. I have a fear of German Shepherds but Lily looks like a nice girl.

It always makes me cringe when I see people picking a cat based on markings or a certain color, etc.

Tangerine sounds cute in her own way. I'm happy to hear you have had the patience to figure her out.

I have had excellent luck picking out based on personality. I thought I would die (seriously) when my Smokey passed at 16. He was perfect.

Now I have Oliver. I got him as a baby from a foster mother who was excellent at socializing cats. Then I spent a TON of time talking to him and giving him an absolute obscene amount of attention.

The result is a whiney cat that talks to me all the time, but I swear he could be a Hemingway cat - he is so obedient.

People say they are independant. Nope - they are what you make them (from birth). Sorry people if you don't have the time.

They take work. Dogs are no better in that respect.

Lily looks so pretty in this picture!! And you can't even tell that Tang is looking inside to your laundry couch plotting her next potty break.
xo

I just made a post about my own odd couple. My cat Pib and our French Bulldog Zeus they love each other.

Great picture. People should get along so well.

OMG, I can't get over that dog! She's so gorgeous!

That is one of the cutest animal pics ever! I love how their paws are intertwined. Tangerine sounds a lot like my kitty (RIP), adorable and hell on paws. :) Thanks for sharing!

They look like the softest duo ever! That is an awesome picture. How do you manage to keep Lily so white?

Your fur babies are adorable. Wanna trade? One of mine brought me a dead bat this morning,,,uuhhmm eewww.

orange tabby cats are very unique, but Tangerine's personality is right-on, as far as orange cats go, anyway. and, sadly, i know this from experience.