I Do It For the Kids 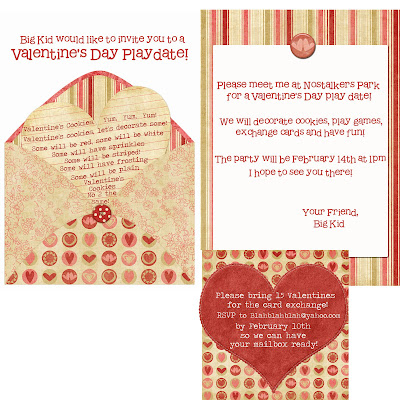 Of course I went to the Chaws with my Valentine play date invite problem and they had a solution. They actually had several solutions, which is quite typical, and started several different conversations, one of which evolved into an invite.

The digital scrapbooking chaws steered me in the direction of this cute kit from Shabby Princess (too lazy to find a link or even add .com. You'll figure it out), but I still wasn't sure.

The entrepreneurial card making/scrapbook supply selling chaw mentioned little envelopes and I'm a sucker for little envelopes. She also had heart shaped paper clips and we decided I needed something to attach to something with said paper clips, but not anything with too much manual assembly since I suck at cutting and pasting and the entrepreneurial chaw always ends up offering to do it for me, but she has 17 month old twins and a 4 year old that makes Big Kid look average in terms of chattiness and intelligence, so I just can't pile anything else onto her plate (other than the few small favors I did ask from her).

So after several lengthy conversations and one google search for the poem, I think I'm going to go with this as the front and back of the invite and the little square down at the bottom will be in a little bitty envelope paper clipped to the invite. Awwww. I know, it's really cute.

So that will be cute. Now I have to start gathering cookie decorating supplies and decorations and what not. I also realized that since I'm going to be handing out the majority of these at school, they won't even have the cute photo stamps (which still have not arrived) on them. So there wasn't even any point to this whole thing, since the original idea was to have a use for the cute stamps.

P.S. I'm still upset about the poop thing. I'm pretty sure I am suffering from Post Traumatic Stress Disorder as a result of that incident. I told them all that I was resigning and to consider this my two weeks notice and use it wisely to find a replacement, but Big Kid didn't look up from the Wii, Mr. Ashley asked where I would go and little kid probably shrieked or broke something, I don't remember because I'm not speaking to him.

Also, I'm starting to think that God doesn't even read my blog because the rest of the night went no easier. Let's just say my couch smells a lot like Dr. Pepper and probably always will.

If anyone ever throws poop at me again, I will find somewhere to go. Being homeless would have to be easier than motherhood.
Posted by Unknown

Email ThisBlogThis!Share to TwitterShare to FacebookShare to Pinterest
Labels: and the attention

Okay, so in keeping with my regular habit of copying most of the cool stuff that you do and buy (or at least wanting to), this evening I volunteered to host the Valentine's Day playdate for my homeschool group. We'll have around 15 kids ages 2-7, and I want to pretty much copy all of your ideas. So please send them to me. I won't be doing invites, but I want to decorate cookies, read a book, and play a game or two. We will do a Valentine exchange, too, since all these poor kids don't get to go to school 'cuz their crazy moms want to teach them at home, so this is probably the only chance they'll get to exchange Valentines this year. Poor deprived things. Don't even get me started on how they're going to miss out on Prom someday either. But I digress. I need your ideas. All of them. Detailed. TIA.

Can I crash the party? I'm cruisin' the BB and checking out the fat drama that I missed today because of drama being held elsewhere. I get hungry when I watch fat people, so cookies would hit the spot right now. Could I bring my cold, pasty white butt in my bikini to Florida? I promise I'll be good.

I got caught up in MEMEME last night and forgot to mention that the invitation is SO pretty! I love the poem and the colors and the paper and the buttons and the font. If you have an extra, you could send it to me with the cool stamp. We would love to see one in person. :)

Very cute! Are you making the "mailboxes" too?

Awesome invite! You are very creative (even if you did get help!)

Tell Mr. Ashley you would go to the Hilton in Boca Raton, which has free breakfast.

Uhh... I'm okay with you getting Hot Mommy Blogger, but come ON... I NOMINATED YOU! At least pimp me out for the parenting blog!