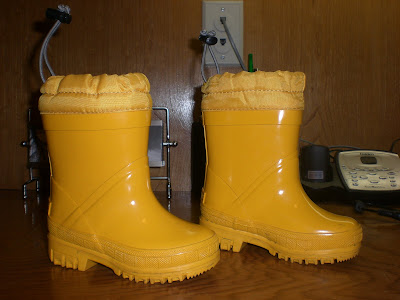 What are the odds that The Renee would have yellow rain boots in TRUE Excellent, Like New condition, in her garage? The perfect size? That she is willing to donate to the cause? (She also donated THE SWEETEST little bunny coat, you do not even know. GORGEOUS)

The Renee is known amongst the Chaws as "Fate" because of the following story she shared with us one day:

I freecycled this cool picture I had of a baby holding his bottle between his feet while he drinks it - it's a very sweet pic but we don't have any place to put it anymore. Anyway, I freecycled about 10 things and got a ton of responses for everything except the baby pic. Finally, a woman wrote to express interest in it for a daycare center she is starting. I wrote back "This is fate - I received lots of responses for my other items but this one is still available - it's yours!" Meaning, it must be fate for her to have the picture because I had posted it a few days before and no one had shown interest in it. Usually you can post a dry dog turd on freecycle and get at least two people who want to pick it up that same day. Anyway, I received this email just now:

Fate,
Thank you for the nursery photo. It is now hanging on the wall at the infant center.

Thanks and happy Freecycling,

LMFAO AGAIN! I have no idea how many times I've read/discussed/remembered that story but it cracks my ass up.

However, I think we can all agree that this is Fate.

And I've always known that it was Fate that made The Renee and I friends...have I mentioned lately that we were not only due the same day, but we gave birth the same day, two days late (she hates when you say late, by the way, she's one of those that'll let those kids camp out in there FOREVER with no complaints from her. Not me. I complained enough for both of us)?

It must be Fate.

I opened up the window for Land's End and added the boots to my shopping cart a few hours ago, got ticked that my free shipping code expired and decided to wait and then The Renee IMs me with The Perfect Boots.

Email ThisBlogThis!Share to TwitterShare to FacebookShare to Pinterest
Labels: Case of the Grungy Boots: Closed.

Hooray for me! It feels so good to be a hero. I will make a special trip to the Post Office tomorrow just for you.

-The Renee, aka Fate

Maybe you should send a picture of these yellow boots to the ebay seller showing her what "Excellent Used Condition" should look like.

That's so cool she did that! Now if she would just visit my blog again. :)

Awww....those are some really cute boots!

That story will never get old and TR, you ARE a hero!!! Nothing like Renee to the Rescue, is there?

I am so happy for you. I totally think you should do what So Tired suggested & send that photo along.

Renee... the Goddess of Fate. It suits her.

Renee for the win!

I hope you at least really left the other bitch bad feedback.

The Renee is so awesome. And you will have the most adorable spring photos.

I love being in the spotlight. :)

Totally Fate! I'm so happy for you. Those boots are too cute.