A Weekend with The Ashleys

So on Saturday, we went to a dog day in the park sort of deal. 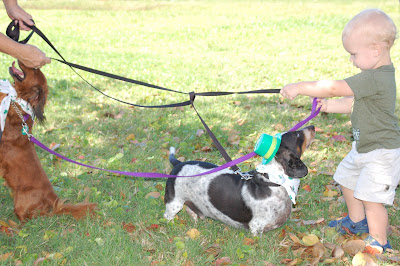 My parents had "the boys" with them: 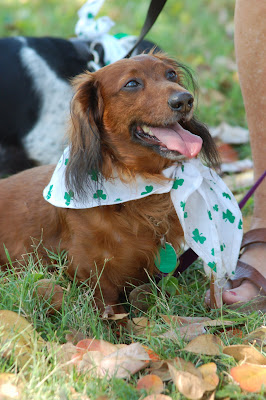 Frank. Frank's a real pussy. He lives in fear of terrorists and kidnappers. I call him Francis. 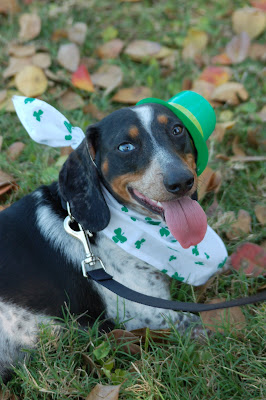 Roscoe. My parents paid $1200 for this "Miniature" Dachshund. Who weighs 30lbs and looks very much like a Beagle. 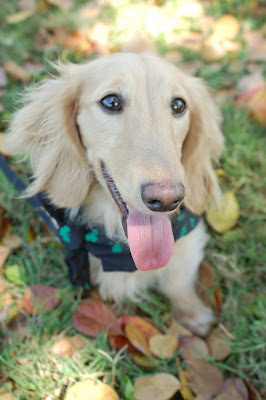 Duke. Is that a gorgeous dog or what?? They just got him, some people gave him to them because they had 4 dogs and our county only lets you have 3 and they were tattled on.

I had my boys: 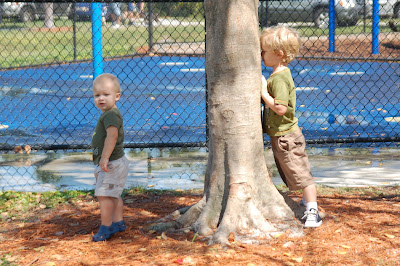 This picture really helped me see what a fat ass little kid is becoming. It's really no surprise because he demands food ALL.DAY.LONG. but I hadn't really noticed the results of that until now.

Big Kid is pouting because his day "went bad" once he realized that we weren't just going to swing on the swings the whole time. 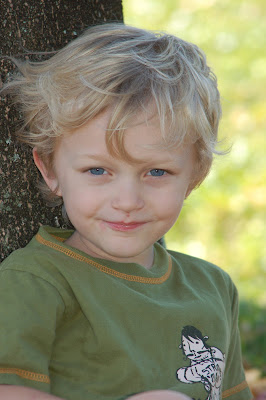 Here he is in a moment that he forgot about his plans to ruin everyone's day because we weren't doing what he wanted.

We didn't bring our dogs because they are pains in the asses, but mostly because Heidi Louise isn't looking so hot these days and I don't think she could handle the long walk or the heat. Her Cushings Disease seems to really be in the advanced stages now. It's really sad, but she's got several large tumors and her whole life is consumed with the thought of food. Cushings is a tumor near the gland that helps you know when you are hungry or full, so she is just hungry all the time and will never feel full.

If she gets into some garbage or cat food (which she does at every possible opportunity) she will eat until she can no longer walk and looks like a boa constrictor that swallowed a goat. Then her little legs can barely carry her. Poor old girl.

So it was a nice day, but got a whole lot nicer when my parents offered to switch us cars so we could be kid-free for the afternoon. Especially with Big Kid being such an asshole about the swings...hell to the yeah you can take them.

We decided to troll the downtown thrift stores for 80s party gear and see The Other Boleyn Girl. Holy cow, the thrift store trips were fun.

I'll have to show you the pics from that when I show you what I got for the 80s party. I'm having some sort of problem where every time I type, I have to wait a moment for the words to appear. That really does suck. This post has taken me like an hour, no kidding.

So the movie was going to be at a weird time by the time we were done with the thrift store trolling, so we decided to get some liquor and rent some movies and go home. The liquor store had a "virtual bartender" there and I was able to ask it what I should do with the Blueberry vodka I wanted to try and it gave me this kick ass recipe:

You're supposed to combine with ice into a shaker and pour into a martini glass with a blueberry garnish...but I'm a little ghetto for that. It was just as delicious poured together over ice in my plastic cup with nary a blueberry to be found.

We watched Apocalypto. I didn't realize it was written and directed by Mel Gibson and didn't notice that until I was already set on seeing it. Otherwise I would've probably boycotted it, him being a Jew hater and and all. My Hollywood insider friend says he really is a first class asshole.

However, he's a first class Jew hating asshole with some fanfreakintastic directing and writing skills, in my opinion. Wow. Talk about a suspenseful, heart pounding movie. It was so nice to watch it in our bedroom, in a quiet house, with our drinks within easy reach.

So all in all, it was a great weekend, being mostly kid-free like it was. I'd prefer to do a longer conclusion than this, but this goddamn delay shit has me about to lose my freaking mind. So I'm gonna go.

Don't forget to Market Yourself and Meal Plan today.
Posted by Unknown

Email ThisBlogThis!Share to TwitterShare to FacebookShare to Pinterest
Labels: I really love my kids when they're with someone else

So-that drink mix would be really tasty right now as I sit at my desk trying to make a credit report not look like the total shit that it is..

The boys are handsome (yours and your parents). If Duke ever needs a new home, send him to me in NC.

Also, I think I may have Cushings, thanks to you...Must got WebMD it...

I cannot fucking believe that you never confronted that awful piece of shit skankweed about what she did to your condo. You should've drug her ass to small claims court. WAIT! I HAVE AN IDEA!! Take her to see JUDGE JUDY! I think that they actually pay the judgment at the end, too, so you'll get your money, make her look like the ass she is, and maybe get a plug on TV.

Now, the only trick is getting to LA for filming.

Got caught up on the skank story. Scares the shit out of me because I got married last August and moved to my husband's house. My 'cutest ever in the most adorable neighborhood' little house had to be rented out because I didn't want to give it away (people want foreclosures or houses they can steal for now)... I don't think I got a skank, but your story turned my stomach. I worry. Crap.

Those judge shows pay you to come on. Something like $5k. Expenses would be covered.

How do you make your computer stop doing the delay typing?? My work computer does that when I go onto aol.com...it SO annoying. Let me know what you figure out.
xo Catfish

I sure hope Clemsongirl doesn't read this post. It will piss her off!

But congratulations to you on some child free time! As much as we love those little fuckers it sure does feel good to be free of them every once in a while!

My meal planning just went to shit. I have been doing Pass Your Plate freezer meals for 18 months and I'll be damned if they didn't change their whole process and raise their prices. Get ready Mr. Sasha, it's back to Hamburger Helper (HH) and Taco Cornbread Pizza (TCP- which actually quite rocks BTW).

So here's my meal plan for the week:
Mon: Spaghetti Western from PYP
Tues: Confetti Meatloaf from PYP (last PYP meal!)
Wed: HH, Spag or TCP
Thurs: HH, Spag or TCP
Fri: a break from the hot hot kitchen and by damn, we are going out!

I love it when you post pics of the kiddos-they are just adorable!

But, I'm happy you got some kid-free time!

Is BK growing his hair out into the surfer-dude look?

Nope, I am not even a little annoyed. Jealous of the great weekend? Yes. But you deserved it!

Glad it was fun.

OMG I had no idea I had that level of grown-upness in me.

I almost missed it... but if your man was all for The Other Boleyn Girl' then he's a keeper :)

I AM LOVING that I'm not the only person out there dealing with a SKANK HO.

Making my grocery list now and here's my shameless self promotion:

Why does every family have the token skank? I love hearing about yours though.

The kids are adorable.

And I am SO going to make that drink!

What a gutter slut. I had a friend in college that called skanks "gashes". you know, because their hoo-has look like...I know, gross. But fitting.

I also wanted to kiss your ass a bit. Instead of working, I started a knitting blog. Because I love knitting. And I love talking about myself. And I worked on it all day instead of doing my actual work. Which kicks ass.

Guess what I did? (I'm very proud.) I made a Master Grocery List that pretty much has everything we ever buy, organized by category (which coincides with aisles in the store, pretty much). I made a note next to the items that I always want to have on hand. So each week, I print my Master List, check the status of those "must have" items, and circle them on my list if I need to buy them. Then I use my meal plan to circle the other items I need to buy. I'm on Week 2 with this new plan and it's working really well so far. Last week, I spent about 10 minutes making my grocery list instead of my normal 20-30, there was no stress about forgetting to buy something we need (or, God forbid, not having something that His Royal Highness has requested that we have on the weekends), AND....drumroll....I spent about $30 less than I normally do when I just cruise up and down all the aisles. Hooray for organization! Hooray for efficiency! Hooray for savings! Hooray for the NLP:RD! (I am such a dork. I know this. I embrace it now.)

all that kid free time sounds like nevaeh ;) Glad you didn't bitchslap her skany ass in front of your kids. Although COPS:The Ashleys would be VERY entertaining I'm sure!

You boys are adorable and damn that Duke could do commercials!!! What a pretty dog!

I had a dirty bitch destroy our rental home a couple years ago. I feel such violence toward her for deciding indoor bunnies would be a good idea. The lease, after all, did not specify she could not have bunnies . . . because in her tiny mind, bunnies are apparently not animals. Go figure. I do not know what happened to your condo, but feel rage filled nonetheless!

Oh so glad you didn't get arrested in front of the kiddos, they are too cute to be subjected to that.

We were also lucky and unloaded our kids on MIL got to go out to an actual bar that has live music and lots of adult beverages, it was freakin fantastic. I drank lots of wine and felt great, that is til MIL called and my oldest didn't want to spend the night, what a brat. I wanted to tell her to tell him to suck it up, but she may have thought I was a bad mom or something. So off we had to go to her house at 11.

Okay, we're on spring break this week so I thought I'd splurge and buy a bottle of blueberry vodka. I just rode my bike down to the store w/ a 3.5 year old on back in the baby seat to buy the 7-up and cranberry juice. Ha! Maybe that burned enough calories to justify the drink (or two?) I'm going to knock back tonight. Thanks for the recipe!