That last post was about the most productive thing I did all day.

At some point in the afternoon I started coming down with a wicked headache that gradually turned into a full blown migraine...and I had the command performance with the uncle tonight that I had made too many jokes about getting out of to get out of now.

I actually ended up kind of looking forward to it anyway, because I was having a kick ass hair day and had a need to get out of the house, headache and all.

And then we got there.

As nice as they are, they had brought the boys gifts.

Within five minutes of our arrival, there were dogs jumping and barking, monkeys flying through the air screaming, kids squealing and too many adults talking. I was freaking the fuck out and positive that I was going to vomit and every shriek and bark further convinced me of that.

At one point, I remember briefly considering standing up and screaming, "I AM FREAKING THE FUCK OUT, PEOPLE!" but decided against it.

It was waaaaay too much noise for someone with a migraine. Luckily I managed not to make a spectacle and not to vomit and not to say anything rude about the screaming monkeys.

The kids were charming, even little kid who was so tired his finger was pretty much permanently attached to his belly button and who discovered that being a human milk fountain got a big reaction, and it was nice (as it always is) to see my grandpa and aunt and uncle.

I just wish the screaming monkeys and the migraine hadn't been involved. 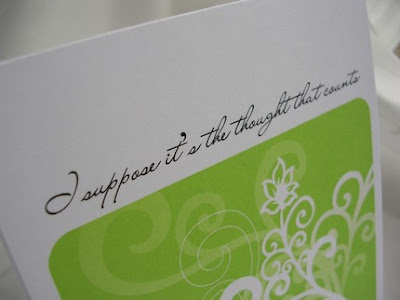 www.junkmailgreetings.com, of course
Posted by Unknown

Truly. That would have killed your migraine and made the shrieking monkey event much better.

I wouldn't say it if it were not true. I hope you feel much better!

That totally sucks! I'll trade you the shrieking monkeys for the freakin' HARMONICA my sister thought was a good gift for my 4 year old. That's OK, I'm sure my nephew will LOVE the electronic drums we're giving him for his 2nd birthday.....

Hope the migraine has subsided.

I can't believe you were even able to leave the house with a migraine! I can't even move when I get them!

Who the hell gets kids shreiking monkeys? You might want to "lose" those to save your sanity!

I've developed a "lack of sleep" headache this week that just will not go away. And my girls just do not know when to SHUT THE FUCK UP!!! In other words, I feel your pain.

Holy shitballs, Ashley! I had to read this to my husband...my in-laws got these for my boys last Christmas. SO ANNOYING.

When we got home, I slingshotted those sons a bitches into the trash. They didn't make it into the house. The only problem was that when we tossed a diaper into the garbage can, the monkey would shriek, A-WWWWWWAAAAAAAAAAAHH WAH WAH WAH....I bet the garbage guys pissed their pants that Monday morning.

I know your pain! We were given a set of those damn monkeys too. Ours are wearing little blue capes and "hiding" in the back of the linen closet. They flew there, I promise!

I thought my last few days were hell, but you win. Shrieking flying monkeys cannot be a good thing. Ever. This is a toy that would have to accidentally on purpose disappear.

I know those shrieking slingshot monkeys of which you speak. One of the attorneys I work with has one and every so often I hear it shrieking down the hall. My office has glass walls and my co workers like to shoot that damn monkey at my office. Luckily the shrieks warn me of their upcoming arrival!

They really would cause a mom with a migraine true pain, I'm sorry!

There has got to be a special place in Hell for the inventor of the Shreiking Monkey sling shot.

That, and the maker of Floam.

How about that Lilo and Stitch orange plastic megaphone thing that changes their voice to a really annoying pitch. Been there done that one.

It somehow got melted. I have no idea.

WTF are these people thinking? It's sadistic.

Luckily I have never heard of these terrible things and hope to never do so.

We have just been battling another damn cold here, and I am coughing my f'ing head off, so freaking irratating especially with the lack of sleep.

Can you imagine a City Manager actually distributing these things to its attendees? Well our neighboring city did, and he demonstrated how they were used by flinging one to everyone in the room. Luckily, my FIL is the one that went and received it - AND has the pleasure of the girls torturing him at his OWN house. :D They are cute with their little capes though. haha

Sorry about the migraine though - I can't imagine the shreiking monkey with that. :(

Where the hell are you? Only one post today!?! Seriously. You are totally slacking.

Thank God I've never seen these monkeys that you speak of. You know how I feel about this subject...

Hope the migraine is better today. If not, take drugs. It's my remedy to cure all things.

we have four flying-screaming monkeys. i always have this delicious urge to sneak one into church, wait for a somber moment, then send it flying and screeching it's way across the sanctuary

OMG!!! I love shrieking mokey sling shots! I just bought 3 of them a couple weeks ago, an there aren't enough to go around. Buuuut, with a migraine, yeah, not so much. Just give the monkeys a chance, k? Instead of being the victim, try being the perp ... fling them at your kids. It's fun!