to LOL cats. These badly spelled cat photos on sites like I Can Haz Cheezburger have for some reason become an internet phenomenon.

As a result, Big Kid has taken notice and has become addicted. Now whenever I sit down at my computer I hear "Hey, wet's wook at kitty pitchurs!"

So now I am forced to stop and read all LOL cats (I take out the curse words, 'cuz I'm a good mom like that) and I have to read them in a funny voice and then we have to discuss and sometimes we need to scroll back up the page to give the LOL cat some imaginary milk or to tell it to be nice (a lot of them act nasty, according to Big Kid).

Sometimes he'll see one that will make him laugh so hard I'm afraid he'll pee himself and he'll have to run into the other room and explain the hilarity to Mr. Ashley who usually has no idea what he's talking about.

This ceiling fan cat video had him laughing until he was crying:


He is constantly trying to explain the concept of this anti-gravity cat to others:

Last night he saw this: 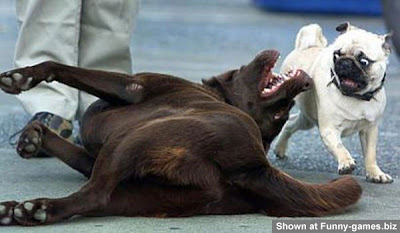 The smile fixed on his face instantly fell.

Big Kid: Dat doggie is scay-uhd.
Ashley: (laughing) He is scared isn't he? His eyes are all bulging out.
Big Kid: Dat is not nice. Dat big doggie is gonna bite dat poor wittle doggie.
Ashley: I don't think he's going to bite him, he's just smiling at him and that makes that little dog scared.
Big Kid: If he did bite him, dat would leave marks. And it would pwobably hurt dat wittle dog. It dest makes me too sad (eyes filling with tears).

Okay Mr. Sensitive! How sweet is he? Can you tell he's being terrorized by a biter? (Yes Afro, I tried biting him back...didn't work)

I just overheard the following conversation:

Email ThisBlogThis!Share to TwitterShare to FacebookShare to Pinterest
Labels: He can touch his own nipples...no rule against that

The nipple touching conversation is great. I bet you are glad you overheard that :)

OMG! I'm laughing so hard. Why are they fascinated with nipples. They feel they can just reach out and touch someone like that.

I have a 12 year old student with autism who is also fascinated with nipples... thankfully just his own. He is constantly reminding me that all he has to do is look down his shirt and he can see them anytime! I'm just glad that seems to be the only body part he has currently discovered.... and the upcoming Parent/Teacher conferences will be very interesting. Can you imagine that conversation?

My husband loves those damn cats. Seriously, he could sit at that website for hours and hours.

The nipples thing is funny. Totally sounds like a conversation in our house.

haha I'm a fan of those cats myself. Perhaps I have a lot if common with big kid. I put one on my own blog a few days ago.

Crack me up! My little kid loves his "nickles" too.

My daughter loves nipples she loves to touch hubbies. He HATES for anyone to touch his nipples so the more he fights it the funnier she thinks it is. As for mine she is just facinated with my boobs and she hasn't been on the boob since she was 8mths old so not sure what it is all about, maybe just the saggyness makes them look funny.

1. I don't like cats.
2. I can't stand those misspelled words...mostly because it takes me a while to figure out what it means.
3. I just spent the last 40 minutes looking at those damn kitty pics!

My 2 year old son made me play that cat on a fan video 7 times. Even after I scrolled past and was trying to read. "Mama, Watch again". He laughed until he farted. Thought you would like to know.
Love,
greatteeth