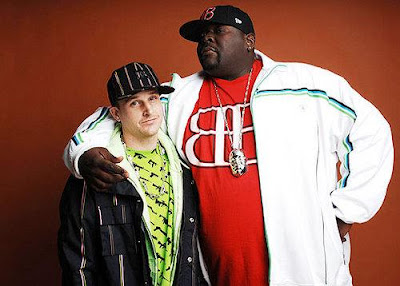 I don't want to, because I try to act like I'm bigger than all of the MTV reality show nonsense, but I really love Rob and Big. They are just so freaking cute.

Come on, the skateboarding bull dog? The pony in the house and in the back of the SUV? All of their little Odd Couple shenanigans?

They crack me up and their love for each other seems so genuine. Their friendship reminds me of a pair of 10 year old boys. They just enjoy each other's presence.

I try not to watch, I really do, but Mr. Ashley loves it and I get a real kick out of both of them. I think they would be easy and fun to hang out with.

Speaking of shows that I really do try not to watch...has anyone seen Life of Ryan? Am I a pedophile for thinking Ryan is hot? 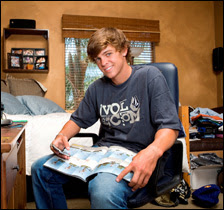 Alrighty, he does look about 14 there but if you're an older chick who likes younger guys you're a Cougar right? So I'm a Cougar thanks, not some sort of pervert. Whatever. Ain't no shame in my game. (a little ashamed of the ain't, I'll admit)

I've been a sucker for skateboarders since I was about 12. What can I say?

So feel free to tell me I'm not a perv for thinking Ryan is a total doll. And that I'm not a dork for loving Rob and Big. And that it isn't odd that I haven't grown out of my attraction for skateboarders.
Posted by Unknown

Email ThisBlogThis!Share to TwitterShare to FacebookShare to Pinterest
Labels: Loving skateboarders is not a crime, usually

I love you, Ashley! Yes, we do have cool stuff & the RX bucks thing is the bomb, because you pretty much get 10% back on purchases (plus if you use Ashley's code, you'll get the 10% off) (shit, if we decide that we want to pay her something for sending sales our way, then we end up making nothing, but that's the joy of retail, people.) ;-)

Anyway, back to RX Bucks, you spend $20, you get $2 to spend later. It adds up. There are also some pretty sneaky ways to get good discounts, but you'll have to make a couple of purchases before I let you in on what they are. :)

OMG I love Rob and Big! They are hilarious. Big is from Mississippi too (where I'm from), so that makes me like the show even more.

I laugh so hard everytime I watch the show.

I as a Rob and Big fanatic...have to watch it!! You're right about their relationship...it seems like they are truly the best of buds. And there is not all the teenage drama B.S. that MTV loves to promote..over and over and over again.

I love Rob and Big - I remember when Big explained the man-pon. Good times.

That shop is great!

my dh is an old skater, so i'll be going over to check it out. thanks!

I watch both shows!! lol I also think Ryan is a cutie!!

OK you may not be a perv for thinking thinking Ryan is cute but it kind of looks like you might have a thing for gay guys because that is "A Gay" in the making if I've ever seen one! *I kid. I kid* (not really, that guy looks more gay the high school musical guy)

Catfish-Thanks for the giggle this morning! I like watching Rob and Big too. One of my "old" friends got an autographed skateboard from Rob for her birthday. I dont remember how though. I don't talk to her enough now to give a shit.

I *love* Rob & Big! They're totally like two 10 year olds with nothing to do. It's awesome! When they take the pic of all of them like they're Death Row, OMG, hysterical!

They have so much fun - I'd love to hang out with them. This season seems a lot more scripted, which I'm not liking but Rob is sooo cute. And he can dance.

We love to watch Rob and Big the show is so funny, and Big's uncle is hillarious. The DVR is set to always record it.

Rob and Big rock! I think Big is absolutely adorable, and they should sell little stuffed versions of him. Or is that weird?

I love Rob & Big! How can you not? They are the freshest thing on mtv - or tv for that matter.

Rob & Big is the funniest show on TV. Even my husband likes it and he always rolls his eyes at me when I'm watching stupid MTV shows like Real World, Real World/Road Rules Challenges, The Hills. What can I say? It's one of my guilty
pleasures. Rob & Big is the only show that makes me actually laugh out loud.
And I too must confess to a crush on skateboarders--particularly Tony Hawk. I have hearted him since I was 12.
So if you're a dork, I'm a dork.

Love Rob & Big but not as much as RYAN(insert smiley face with tongue hanging out) BTW, I'm 36. It's not wrong, really it's not!!GAY, no way!! What I would do to that boy/man!!!