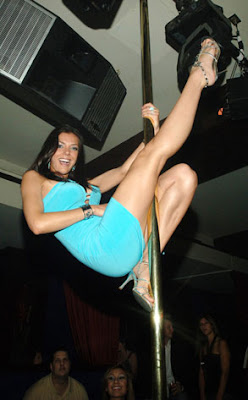 You remind me of someone...hmmm. Can't quite put my finger on it (nor would I want to).

Are you wearing panties with that dress?

Chris must be so proud.

I remember that episode of Surreal Life where you established your claim to him...I'm going to marry a Brady. I thought "Sha, right" because he's way smarter than that.

Obviously, I underestimated the power of young poontang though and you won your prize. Now I get to watch the destruction and devastation from the comfort of my own living room!

I do love reality show marriages. They're always fun for the 2-3 seasons that they last. The Simpsons, the Barkers, the Hogans...I can't even list the many that I've enjoyed.

Anyway, I came across your blog last October during the whole Jonny Fairplay/Crazy Ass Bonaduce fiasco and I was so glad I found it! First of all, it was too freaking funny that you took credit for the whole ordeal. Yeah, because Danny isn't known for being psychotic. Secondly, that you gloated over your involvement like a drama lovin' 8th grader. So fun to read! Last but not least...that Chris obviously has no control over your crazy ass. He should look into Scientology, don't they at least provide handlers, maybe even some brain washing?

Because girlfriend, you cannot be having kids. Not now. Not for a reality tv show marriage. That isn't really even going all that great, from the looks of things. I know, I know, how dare I tell another woman that she shouldn't be having kids...but where would we all be if someone had told me that 5 years ago?

We'd be productive members of society, who had never scrubbed poop off of a wall in our whole lives. We wouldn't be pulling our hair out over having to lock the refrigerator and yelling at our husband for getting caught in traffic and leaving us with crazy little people for even longer!

And we are a lot more sane than you. More mature too, and that's really not saying much.

So from one woman to another, one blogger to another (still can't believe Chris let's you publish this thing), one Brady fan to another...get on the pill. A few of them even.

P.S. Stop all the damn whining already. I don't know if it's that you talk through your nose or the accent or you are just a whiny brat or what but if I was Chris I would take a shish kabob skewer and pierce my own ear drums before committing to that for eternity.
Posted by Unknown

Email ThisBlogThis!Share to TwitterShare to FacebookShare to Pinterest
Labels: You're kind of skanky

I totally AGREE! That chic drives me nuts. Christ could do so much better, poor guy.

I don't think she's even that attractive. This marriage has as much hope as an ice cube in hell. Chris will come to his senses sooner or later....

How funny you posted this because I JUST saw this show for the first time the other day. OH MY GOSH she is annoying!!! It was the show where she took naked pictures with her friend and gave them to Chris. I swear that woman needs a kid about as much as I need another board to lurk on! hehe

I can't stand that girl.

I watched that show yesterday and commented to my husband how much I couldn't stand her. She is so whiny and she tries to turn everything around to make it Chris' fault.

I actually like Scott Baio's fiance'. She is so sweet and supportive of him and all his crazy antics.

The fact that he married her made me lose respect for him. So she may be hot but you're right, she's skanky. I hope Chris is just doing this for the publicity and that he secretly got the big "V"!

Can't stand her. I hope to God they never reproduce

I watched just a few minutes of this last night and couldn't take her whinning. They were fighting about her being bisexual or something she called his exwives sluts and then started crying. I had to tell hubbie to turn the channel.

She is white trash & makes me sick. And he is a pussy. (Can I say that here?)
He should have listened to Florence Henderson but then he is no prize his own damn self.

What I find sad, is that I really liked her when she was on Top Model! I was rooting for her that season and she wasn't the deranged whack job she has become. I remember the episode when she won a chance for her "mama" to come visit her and she was in just floods of tears. Sigh. I also think it's hilarious that Top Model doesn't even acknowledge her anymore... like, you've sunk so low that Tyra won't be associated with you. Damn.

Now, the show cracks me up, but holy hell, Batman - those two should NOT reproduce! Seriously, they are ridiculously immature and all they do is fight!

I can't stand her. What is up with her... Some days its like shes had about 15 xanax. ick!

I'm working at home today and am seeing last night's show finally...how many times does she cry in a show? I'm going to start counting on Sunday!

I've never known anyone to be that whinny and disgusting at the same time!

i think she did end up getting her boobs done. how dumb is she? didn't the dr say not to do it if she was gonna have kids? maybe she is sparing us???

Can you imagine the whining induced nosebleed this post would produce if she actually read it?

I have been boycotting the show b/c I can no longer take the temper tantrums, but I would definitely watch an episode where she reads your blog.

I cannot stand here and never could. She is a waste of air. WTF does he see in that airhead anyways?

I've never even watched that show because I cannot stand that chick. I was thinking about checking it out, since nothing else is ever on TV anymore.

But now I won't. Thanks for the heads up about the SuperSkank.

Drives me crazy! A supposed "adult" throwing temper tantrums to get her way...over and over and over.... I ain't watchin' it.